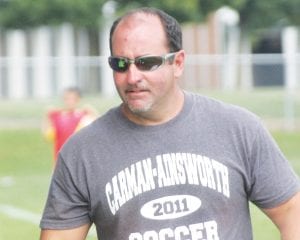 LAPEER — The Carman-Ainsworth boys’ soccer team faces a slate of area talent that stands in its way of a district title. Host Lapeer (13-5-2), which sealed its first-ever Saginaw Valley League title after leaving the Flint Metro League last year when Lapeer East and West consolidated, hosts No. 15-1 starting Monday. Also in the mix are Davison (5-10-1), Flushing (9-6-2), Grand Blanc (10-3-3), Oxford and Carman-Ainsworth (10-7-2).

As the end result of Lapeer East and Lapeer West combining to become a single program this year, Lapeer went on to win the Saginaw Valley Conference- South title in its first year in that league.

With Davison and Carman-Ainsworth both falling in line behind the Lightning in those same league standings, Swartz Creek and Flushing also found themselves in the middle of the Flint Metro League pack. That leaves Oxford as the wildcards in this draw while Grand Blanc annually fights for Kensington Lakes Activities Association-West supremacy.

Individually for the Cavs, Uthman Shukairy, Yahya Abdelhay, Ahmad Alzahabi and Leon Bell have all proved to be valuable offensive assets this year. As for the defense, while Derrald Bogan has spent time between the pipes this season for Carman-Ainsworth, look for Tyler Springer to handle those responsibilities in the 2014 playoffs.

With the action in this district kicking off on Oct. 13, Davison has an opening round bye, Flushing hosts Oxford, Carman-Ainsworth is at Grand Blanc and Lapeer welcomes Swartz Creek. The semifinals will then take place at Lapeer on Oct. 15 and the finals are slated for Oct. 18.

“Grand Blanc and Lapeer (will be the teams to beat in this district). They have experience at key positions and play a very solid game,” said Swartz Creek coach Ryan Trevethick. “They understand how to control tempo and momentum. They each have a few guys that can change a game quickly.”