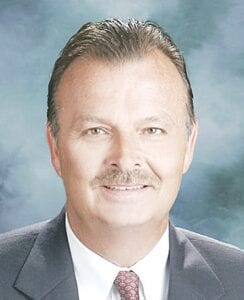 Dave Wilcox has served more than 15,000 clients in his 40 years in the insurance business.

DAVISON — To say Dave Wilcox grew up in the insurance business is no exaggeration.

Dave’s father, Dale, was a State Farm Insurance agent for 30 years with an office in Imlay City. “There was also a State Farm sign right in front of our house on Mill Street in Dryden,” he recalls. “I grew up with people stopping by our house at all hours to pay their premium or ask a question about their coverage, whether dad was there or not.”

Today, after more than 40 years in the insurance business, also with State Farm, Dave Wilcox is calling it a career.

Wilcox went to work for Champion Home Builders in Dryden after high school and a year of college. He moved rapidly up the ranks from sweeping floors and driving a forklift to become plant manager of Champion’s products division.

Champion closed its production facility in Dryden when the 1980 recession hit. Wilcox could have relocated to another state with Champion but his wife, Vivian, still had a good job at Champion headquarters in Dryden and the couple wanted to stay in the area.

That’s when Wilcox talked to his dad about going into the insurance business. “I spoke with Dad. He said it was pretty tough and ‘I don’t know if you want to do that.’”

Having witnessed the long hours his father devoted to his business and clients, the younger Wilcox was forewarned and made the move undaunted. State Farm would not allow father and son to work in the same district and Dave was assigned to the Flint area.

“So, I ended up in this district working in an office on Flushing Road. I started there on March 1, 1981. My first assignment was to obtain 2,000 policy expiration dates by going through the phone book, dialing numbers and asking ‘Has anyone from State Farm reviewed your homeowners policy?’ If not, I’d get the renewal date, write the information on index cards and organize them by date.”

On May 1 of that same year, Wilcox rented his first office in Davison at Kellogg’s Market on West Flint Street next door to where he eventually bought his own building from Dr. Kohan.

“There were no computers then. No email. I had my 2000 index cards, called people a month ahead of their expiration date and made appointments to visit them in their homes. I’d have six or seven appointments every day.”

Wilcox figures he has served more than 15,000 clients in his 40 years in the business. His customers live all around Michigan, “from Plainwell to Petoskey.” Wilcox takes pride in remembering his clients’ names, faces and voices. “It has been a very busy and very rewarding 40 years,” Wilcox said.

As a member of Davison’s business community for four decades, Wilcox has given back to the community through donations to youth athletics and serving as a reading mentor at a local elementary school.

Wilcox has witnessed a lot of change in his industry, from the impact of technology – “In my business, when you are away, you are never away … the cell phone and computer go with you” — to recent auto insurance reform in the state of Michigan which, he says, has created a “nightmare of paperwork.” Still, Wilcox says in retirement he worries about keeping himself occupied and he will miss his clients. “I’ve got some great ones,” he says.

Wilcox plans to relax with yard work and golf. Like his father was, Wilcox is the consummate family man and looks forward to spending more time with his. “I am the luckiest guy in the world. I have a great family, great kids (two), grandkids (three) and my fantastic wife, Vivian.” Dave and Vivian were high school sweethearts. They’ll celebrate their 50th wedding anniversary in December of this year. “We always have a big family Christmas party with 30 to 50 family members which will also be our 50th anniversary celebration this year,” Wilcox said.

When asked what lessons he’s learned from 40 years in business and serving so many clients, Wilcox reflected for moment, then replied, “I would say try to be nice to everybody. I’ve tried to do that. Most of the time it works out. I try to be the person that I am capable of being in order to help people. My employees and I have always tried to do what is right for the customer and for State Farm. That is what I am most proud of.”