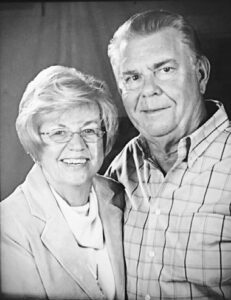 DAVID DUANE “PAT” STETSON, 83, of Davison, husband of Marlene (Koryciak) Stetson, passed away peacefully on January 2, 2022. Cremation has taken place. A Memorial Mass was celebrated 1 p.m. Monday, January 10, 2022 at St. John the Evangelist Catholic Church, 404 N. Dayton, Davison; Rev. Fr. Andrew A. Czajkowski celebrant. Visitation was from 11 a.m. until time of service on Monday at the church. In lieu of flowers, donations can be made to Hospice House of Shiawassee County (hospicehouseshia.org).

Born December 17, 1938, to Ruth and Clinton Stetson, Pat enjoyed a childhood with his two best friends and brothers, Mike and Jon Stetson. After graduating from Davison High School in the Class of ’57 and enrolling in Central Michigan University, Pat was drafted into the United States Army. While proudly serving in the Army, Pat married his best friend, Marlene, on July 14, 1962, and the pair went on to have two wonderful daughters, Sheri and Laura. Upon leaving the Army, Pat returned to Davison, the city and community that he loved dearly, where he continued his public service by taking an active and formative role in the community. He was elected Mayor of Davison in 1981, a role that he proudly advertised throughout his life. Pat’s entrepreneurial spirit also led him to run a number of successful ventures in Davison, including directing Homer Hill Men’s and Ladies’ Clothing, acting as a member of the Downtown Davison Development Authority, and working on city council. When Pat wasn’t working to improve his community, he and Marlene spent many great summers at Eight Point Lake with their family, hitting the road for weekend trips, and taking adventures across the country. This adventurous spirit led Pat and Marlene out west, and they happily resided in Arizona, close to Pat’s brothers and their families. Pat and Marlene once again found success, this time in a new venture, and worked side by side to run their real estate business. His love for his wife, his brothers, sunshine, and a cold beer made these some of the best years of his life. Eventually, Pat and Marlene decided to move back home to Davison where everything had begun for the two of them, and they returned to Michigan to be closer to their daughters, grandchildren, and great-grandchildren. “Poppy,” as he was affectionately known by his grandkids, was a larger-than-life grandfather who made every moment feel particularly special. In his retirement, Pat continued to dedicate his time to the city of Davison as a councilman, and his lifelong love of woodworking gave him plenty of projects to fill his time. Pat will be fondly remembered for being a loving husband, father, friend, and brother. His kindness, commitment to his community, and joy for life were contagious to those around him.

Pat was preceded in death by his parents, Ruth and Clinton Stetson. Pat is survived by his wife of 60 years, Marlene Stetson; his brothers, Mike (Virginia) Stetson and Jon (Noel) Stetson; daughters, Sheri Stetson Compton and Laura Rooker; grandchildren, Ashleigh (Jake) Saldaña, Patrick, Clinton, and Grant Rooker; Kayte and Cash Compton; and great-grandchildren, Gunner, Cruz, Lucia, and Sophia Saldaña. Pat also leaves behind many dear friends and family who created countless memories with Pat and Marlene over the years.