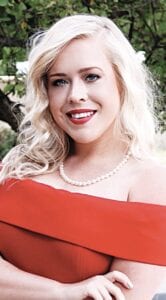 Davis, 27, entered the 7th District County Commissioner race in August when she ran as a write-in candidate during the primary election. She is a marketing director for a local real estate company and is currently completing a dual MBA and MS in Computer Information Systems at the University of Michigan–Flint.

“As county commissioner, I will be committed to public safety, supporting our police and first responders, maintaining our roads, and greater fiscal restraint in the face of a looming budget shortfall,” Davis told the Flushing View prior to the election. “Taking an all-of-the-above approach to building up our community also means not just keeping residents but attracting more. Working together, we must make Genesee County a place for more families to call home by spurring economic growth and creating more high-wage jobs.”

Cousineau, 67, was running for a third term as the District 7 Commissioner. He was elected in 2016 and served consecutive two-year terms. Cousineau was selected as the Chairman of the County Board this year and had also served as the Chairman of Public Works and the county board’s Vice Chair of Finance Committees.

District 7 represents the township of Flushing, Montrose, Vienna, and Thetford, and the cities of Clio, Montrose and Flushing.