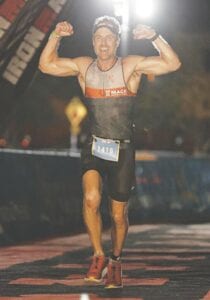 Altogether, Makarewicz completed a 2.4-mile swim over open water, a 112-mile bike ride and a 22.66-mile run along the Panama City Beach shoreline.

“I was obviously very tired at the end, but I felt strong through each transition and surprised by how well I did,” the Florida native said about his performance. “The Ironman is super-challenging but very rewarding to finish.”

Makarewicz, 40, said that he was originally planning to compete in a half-Ironman event earlier this summer but decided instead to take on the full Ironman last month.

“It was quite an experience,” he said. “The event is so well organized, and the people of Panama City Beach were amazing. Seeing the streets lined with cheering people really keeps you going throughout the day.”

Makarewicz, now a chiropractor in Ocala, FL., said his passion for running and biking emerged as he grew up in Davison during the 1980s and 90s. At age six, Makarewicz began racing in BMX events at Richfield Park and was soon competing at state and national races through his early teenage years. He also ran cross country and track and field for Davison High School.

Makarewicz lived in Davison until his early 20s. After graduating from Michigan State University, he moved to Florida in 2006 and started his chiropractic practice in 2010.

Although he loves the Florida climate, Makarewicz said that he still misses Davison from time to time and the memories he made in his hometown. One thing he doesn’t miss, however, are Michigan winters and their knack for disrupting running and outdoor training schedules.

For those who might be interested in training for a marathon or triathlon, Makarewicz said that planning and discipline are essential.

“You have to restructure your life around preparation for the event,” he said. “The effort only pays off if you train properly, both with nutrition and physical training. It’s always tough when you first start training, but after a couple months of dedicated running and developing muscles, it becomes relaxing.”