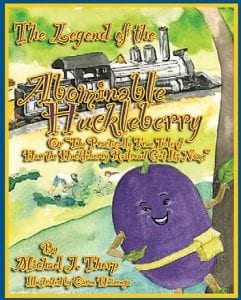 “The Legend of the Abominable Huckleberry: Or the Practically True Tale of How the Huckleberry Railroad got its Name,” penned by radio personality and former news anchor Thorp, was completed in mid- November.

The tale of the 7-foot-tall huckleberry got its start on one of Thorpe’s other projects. He hosts, writes and produces the Huckleberry Radio Hour, a Crossroads Village variety show, now in its fourth season. The Abominable Huckleberry first appeared in a Halloween-themed radio hour two years ago and quickly became a recurring character.

“I don’t know whether it was a dream or a nightmare or just voices in my head,” says Thorp of creating the character.

He began putting the book together in earnest last year.

“The radio show is for a broad audience, but mostly adults, and I thought there’s a children’s story somewhere in there,” said Thorp. 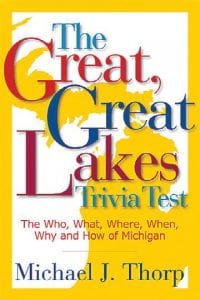 “The Great, Great Lakes Trivia Test” and “The Legend of the Abominable Huckleberry”

She and Thorp met through Thorp’s wife who taught Sunday school together.

“Believe me, I’m not an artist. But she did a wonderful job of translating the ideas in my head,” says Thorp.

Initial reception to the book has been positive and Thorp says he’s been selling out the book in 50-count increments. He calls the book “perfect” for the day when he can read it to his grandchildren and describes it as “a little history, a little fantasy and a whole lot of fun.”

“There’s a little history in this one,” admits Thorp.

The first page of “The Abominable Huckleberry” details the history of the Huckleberry Railroad, the last operational segment of the Flint River Railroad that was established to haul lumber. The Huckleberry Railroad moved so slowly that it was rumored that passengers could get out and pick huckleberries alongside the tracks without risking getting left behind. 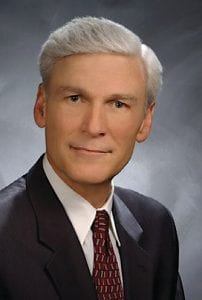 Thorp, who calls himself a “historian at heart” — he’s the host of Michigan Public

Thorp said his interest in Michigan trivia was piqued during a business trip to Escanaba. While eating at a diner, he noticed that his placemat had Michigan trivia questions printed on the front.

“So I brushed off the eggs that dribbled on it and folded it up and put it in my pocket,” said Thorp. It soon became his habit to collect information and play trivia with audiences on air or during The Huckleberry Radio Hour.

While moving to a new home, Thorp came across a box of pamphlets, brochures and newspaper clippings containing Michigan facts and peculiarities.

“I said I’ve got to get rid of all this or do something with it,” Thorp comments.

So the boxful of information was condensed into the Michigan trivia book.

“If you can answer who, what, where, when, why and how you’ve got yourself a story,” Thorp explains.

“The Great, Great Lakes Trivia Test” probes the legality of shooting cats in Michigan, explains the battle for Toledo, chronicles the first-ever shopping mall and can inform a reader of the only road in Michigan never to have played host to an automobile accident.

“It makes for a fun evening sitting around the table or in the car going up north,” says Thorp. “I’ve had several people tell me that this is a good bathroom book.”

Thorp says that he plans on authoring more Michiganthemed books and has a few ideas in the works, currently focusing on a book about the Algonquin Trail and the Blue Water Highway. He’s says that it’s now a matter of getting started.

“I had a friend that told me years ago that the hardest part of writing is picking up the 10,000 pound pen,” he said.

“The Legend of the Abominable Huckleberry” ($12.95) and “The Great, Great Lakes Trivia Test” ($16.95) are available at book stores and gift shops around the state, Crossroads Village, amazon.com and select Barnes and Noble stores. The books are also sold at their respective sites: abominablehuckleberry.com and greatlakestriviatest.com