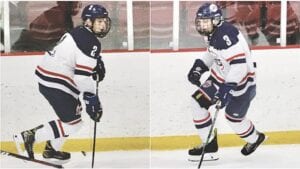 FRASER — In recent years, it has been common to have brothers skating together – or in different years – with the Metro Jets.

This season, Alex Washburn and Tim Washburn suit up in Jets colors on a nightly basis.

Davison natives, both played previously at Flint Powers Catholic High School, a familiar recruiting base for the Jets.

Nearly through the first month of the 2020-21 USPHL season, both Washburns have become enamored with the Jets program.

“So far, I’ve noticed that everything the coaches and players do is for each other and the team, which is something I really love to see,” said Alex, a 2003-born defenseman. “Prior to the season, I didn’t really know anything about the team or program but now that I’m here, the fact that this is a ‘player’s program’ is super appealing. The coaches and all the staff are always looking out for the players’ best interests.”

The older Washburn is on board as well.

“This early in the year, it’s already been amazing to see how well the group supports each other and how everyone has the group’s back,” said Tim, a 2001-born forward. “This offseason, I was talking with them and some other teams, but coming off of knee surgery, I had been unable to skate with any teams. Alex came out to skate, really enjoyed the coaching and the players. Didn’t take much for him to convince me.

“I had only heard good things about the program and saw good things last year. One of the most appealing things is how the program is designed to help us get better and also having the open facilities for us when we need them.”

In seven games this season, Tim has collected three goals and nine points, while Alex has compiled two goals and three points through eight games.

Jets coach-GM Justin Quenneville loves what each Washburn brings to the rink on a daily basis.

“Both of them have been fun to work with here,” Quenneville said. “They come in every day eager to learn and always have energy. Even though they carry similar traits, they both play the game hard within their respective positions. Alex is younger and naturally will have some struggles transitioning from high school, but he is noticeably getting better in the areas of his game on both sides of the puck. He brings a good shot from the point and defends hard every shift, so we know he will continue to grow here.

“Tim, on the other hand, has a couple years on his brother and is attentive to every to every detail. He’s a sponge to information and does a lot of things well offensively. He brings a strong north-south game up front and isn’t afraid to play physical either.

“They are both committed to process here and we look forward to watching them continue to benefit from this platform. We have had success with brother teammates before, and I don’t see these guys missing a beat here either.”

Both players fill their roles to a ‘T’ while being consummate teammates, on and off the ice.

“I think my good skating and nasty attitude towards the other team helps us come out on top from puck battles and generating offense from the ‘D’ zone,” Alex said. “Right now, I’m just focused on finishing up high school and leading the Jets to more victories. Down the road, I’m looking to continue my life as a student-athlete and play college hockey.”

“As a player on the team, I bring a good work ethic, whether it is supporting the puck down low in our zone if we are outnumbered or winning the race to an iced puck,” added Tim. “Another thing I bring is possession in the offensive zone, whether it’s having poise with the puck or giving my teammates an option to move it.

“I am trying to evolve my game and find ways to get the Jets on the scoreboard more without compromising defensively. In the future, I am going to play college hockey.”

Teammates in high school and now teammates in junior hockey, there simply is no better situation, according to the duo.

“Me and Alex have actually played with each other back at high school, both as captains,” Tim said. “It’s amazing to have another chance to play with him.”

“I enjoy it,” Alex added. “My brother and I both played high school together at Flint Powers, along with (Jets forward) Joey Carpenter, before coming to the Jets. But after our last season there, we thought we wouldn’t be playing together anymore, so it’s nice that it happened to work out that so we can still be on the bench with each other.”