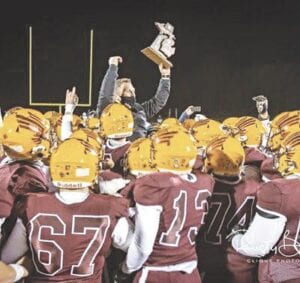 DAVISON — After a nearly two-month long delay, the Davison Varsity football program will resume its quest to repeat as state champions with a regional final contest this weekend.

Davison (9-0) will face Detroit Catholic Central (9-0) this Saturday at Lapeer High School, with kickoff set for 1 p.m. The winner will receive a spot in the D-1 state semifinals.

Coming into the game, Davison will be without two-year starting quarterback Brendan Sullivan, who led his team to the D-1 State Championship last year and committed to play college football at Northwestern University. Sullivan enrolled early at Northwestern this winter and was planning to play in the regional final before leaving for college.

But with the regional final getting pushed to this weekend, Sullivan had to forgo his last Davison game and begin his college enrollment.

Despite Sullivan’s departure, Davison Head Coach Jake Weingartz said that his team won’t have to rely on quarterback play alone.

“When we beat Grand Blanc (in the district finals), we threw only six times and ran for 450 yards,” he said. “Any time a team loses their best player, that’s tough to recover from. But as I tell my guys, football is the greatest sport because it’s the ultimate team game.”

Although Weingartz hasn’t revealed who will be the starting quarterback for Saturday’s game, he said that Sullivan’s replacement is very capable of handling the offense. He also said that Davison will have to utilize its strong running game against Detroit Catholic Central and control the line of scrimmage.

“Detroit CC has a great front seven on defense and good linebackers,” he said. “Offensively, they are very physical up front and have two really good tight ends that we have to shut down.”

Davison is riding high into the regional final after advancing with easy wins in the district playoff stage. The Cardinals defeated Lapeer, 47-6, in the first round of the districts, won by forfeit over Rochester Adams (which cancelled the rest of its season due to a COVID-19 outbreak within the program) and beat Grand Blanc, 48-19, in the district finals.

Following an eight-week pause of all high school sport activities that began in mid-November, high school football teams were finally allowed to resume practices last week in preparation for the statewide regional games. Since the restart, Davison has been practicing throughout the Christmas break to get in shape, and the players have been taking COVID-19 tests three times a week.

Weingartz said that none of his players or staff have tested positive for COVID-19 since practices restarted, adding that his team is taking the interruptions and challenges of the season in stride.

“The kids are working really hard and overcoming a difficult situation,” he said. “We’re the defending champions until someone takes that from us, and we’ll continue to grind and improve on what we did last year.”