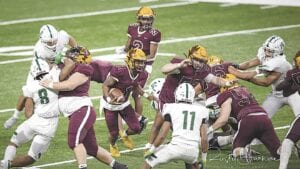 DETROIT — The Davison Cardinals’ quest for back-to-back state championships came to a grinding halt on Saturday as they fell 41-0 to West Bloomfield in the D-1 state final.

Davison (11-1) entered the championship game in Detroit with one of the state’s highest scoring offenses (41 points per game) and a defense that had only given up 76 total points all season. But the Cardinals were shut down by a powerful West Bloomfield defense and tested to their limits by star running back Donovan Edwards.

Edwards, a University of Michigan commit, racked up 257 rushing yards on the Davison defense and scored three rushing touchdowns—including a pair of 70 yard-plus touchdown runs.

Meanwhile, the Lakers defense held Davison to just 167 total yards of offense and swarmed Cardinals quarterback Dion Brown Jr. all afternoon. Brown, a converted wide receiver who started the last three playoff games for Davison, completed only 4 of his 14 pass attempts for 42 yards. 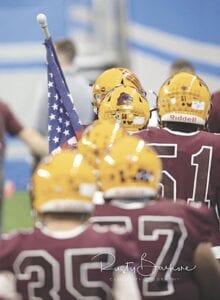 Davison’s afternoon started promising after the defense forced a fumble on West Bloomfield’s first possession of the game. But after the Cardinals lost a fumble inside Lakers’ territory, Edwards ripped off a 78-yard touchdown run to put West Bloomfield up 7-0.

Harrison “Harry” Unger, Davison’s leading tackler and starting tight end, also sustained a hamstring injury on the Cardinals’ first drive and did not return to action.

West Bloomfield added a field goal with 8:12 to go in the second quarter, then extended its lead to 17-0 with a 13-yard rushing touchdown from Mehki Elam on its next drive.

Davison responded later in the quarter with a drive into West Bloomfield territory but had a Payton Pizzala touchdown catch nullified by an illegal formation penalty. The Cardinals then turned the ball over on downs at the Lakers 33-yard line.

On Davison’s opening second half drive, Niles King recovered a Cardinals fumble and ran it back 39 yards for a West Bloomfield touchdown. Edwards added two more rushing touchdowns in the third quarter, and West Bloomfield tacked on a field goal to push the lead to 41-0.

With the win, West Bloomfield (11-1) captured its first state championship in school history.

Davison’s offense was led by Te’Avion Warren with 44 yards rushing and Carter Cryderman with 41 yards rushing. On defense, Clarke Hamilton led the Cards with six tackles, followed by Luke Malenich with five tackles.

Despite the loss, Davison Head Coach Jake Weingartz said that he was proud of his team’s accomplishments this season.

“Saturday was not the result we wanted, but we’ve been very successful in a great two-year run,” he said. “I told my players, ‘If you work as hard as you did this season and persevere through adversity like we dealt with this year, you’re going to be successful in life.’”

Over the past two seasons, Davison went 23-3 with two regional titles, two district titles and the program’s first-ever D-1 state championship in 2019.

“For us to get back to Ford Field, after winning the championship last year, that was special,” Weingartz said. “This senior class will go down as the greatest in Davison football history.”