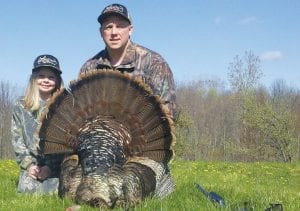 Collick was hunting on family property in Davison when he recognized a tom he and his family has seen just this year for the first time. Now, as anyone who turkey hunts knows, the birds are quick and notorious for keeping their distance from humans.

However, this tom was quite recognizable by its six separate birds, and Collick noted he had seen it earlier in the year once the season opened.

“We had not seen the bird until the first week of the hunt, but had several run-ins with it,” Collick explained. “Prior to that, we had never seen it on the property.”

Good things come to those who wait, because Collick’s tom has a total beard length of 56 inches and once the spur lengths are added in, the overall measurement equals an unofficial score of 59-1/8 inches. 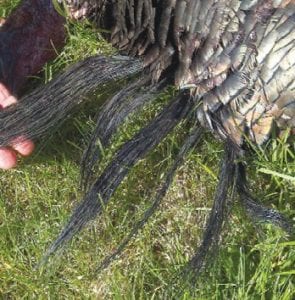 “The best I can tell, the current state record has seven beards and scores 53- 1/8 inches,” Collick added. The scoring system used by the National Wild Turkey Federation also adds in the weight of the bird, but Michigan does not add the weight.”

Collick shot the tom with a Benelli shotgun at seven yards. This one, he says, will definitely get mounted.

“I have six turkeys already mounted, but this one is kind of special and has to be mounted,” Collick laughed.

An avid bear and deer hunter, Collick said he finally took a buddy up on his offer to go turkey hunting about a decade or so ago when Ontario ceased its spring bear hunt.

“I used to do the spring bear hunt in Ontario, and once that was stopped, I took my friend up on his offer to take up turkey hunting. That has to be about 10 or 11 years ago.”

He added, “I do absolutely anything to be outside. The family owns property in Davison and it’s just a way to get outside early in the morning to see Mother Nature wake up and enjoy the day. I’ve gotten to travel all over, hunting elk, western hunting mule deer and antelope, and as I said, I bear hunted for 11 years in Ontario every spring. For fall hunting, I’m very much into deer hunting.”

Collick continues to share the photos and tale of his hunt, while he awaits the official word on just where his tom falls in the official state record books.