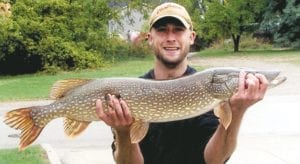 GOODRICH
— Scott Borys, 27, of Davison snagged this northern pike in the Atlas/Goodrich Mill Pond on Tuesday, Sept. 28. An avid angler, Borys said he was bass fishing using a rubber worm when he snagged the first of four pike on the day. The biggest, shown here, was 15 lbs. 40-inches long.

“I’m a big time fisherman and snagged the first one, which was a smaller one, so I put on a pike spinner lure and caught two more for three,” Boyer said. “Then I moved to another spot in the lake and snagged this huge pike.”

Boyer said his catch doesn’t come anywhere near the state record of 49 lbs., but just the same, took it to a local taxidermist to be mounted.