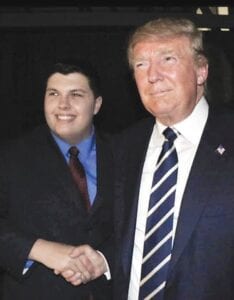 Matthew Smith of the Davison Board of Education shakes hands with President Donald Trump. Photo courtesy of the Genesee County Republican Party

Smith was elected by the State Delegates of Genesee, Bay, Saginaw, Tuscola, Arenac and Iosco counties.

“Whether you agree with my choice for president or not, it is an awesome opportunity to participate in our democracy on the national convention floor.” said Smith.