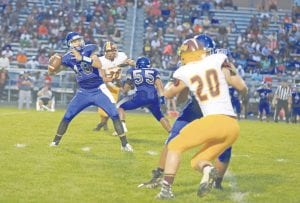 The Cardinals were nearly unstoppable on offense as running back Tariq Reid ran for three touchdowns and quarterback Brenden McRill ran for a pair of scores and passed for two more.

“Brenden (McRill) is a tremendous weapon for us with his toughness and composure and he excelled again tonight,” praised Davison coach Kyle Zimmerman. “Tariq (Reid) also excelled along with Garret Goyette and Ryan Schlak.”

McRill opened the scoring with a 9-yard run midway through the first and Reid followed with a 5-yard score on the next Davison series to stake the Cardinals to a 14-0 lead. McRill then hooked up with Goyette for a 27-yard strike that made it 21-0 at the end of the opening stanza.

Reid sandwiched a pair of long sixpoint rushes around a lone Carman- Ainsworth score in the the second quarter to give the visitors a comfortable 35-7 cushion at intermission. Reid’s scoring sprints in the second covered 63 and 51 yards, respectively. Carman- Ainsworth’s first-half score came on a 50-yard completion from Dustin Fletcher to Marshall Brooks.

The Cavaliers struck first in the second half, thanks to a 6-yard run by Fletcher at 6:10 of the third, but the Cardinals retaliated quickly when McRill ran in the pigskin from seven yards away just 21 seconds later.

After another Carman-Ainsworth score, McRill connected on a 40-yard scoring pass to Schlak with 1:37 left in the third. Then, on their next possession, Cal Stefanko hit pay dirt from two yards out. Graham Hungerford kicked his eighth straight PAT with 10:50 left in the contest, making the score 56-21 and put the running clock into effect for the rest of the evening.

“We came here determined to play hard and execute,” said Zimmerman. “We were confident, but I didn’t expect to win by this margin. But we’ll take it.”

Davison finished with 343 yards to just 147 for the Cavaliers.

Reid ran for 167 yards on 16 carries while McRill rushed for 60 yards and passed for 97, completing all four of his attempts. Goyette and Schlak each caught a pair of aerials. Goyette’s catches covered 51 yards and Schlak’s snags were worth 46 yards.

Byron Gates gained 19 yards on seven tries for Carman-Ainsworth and Fletcher completed 6-of-18 passes for a pair of TD’s and 108 yards.

Collin McMillan was dominant on defense for Davison with 10 tackles. He sacked the quarterback four times. Corran Thornton had five stops and Schlak came up with an interception.

The win keeps Davison undefeated at 3-0 while Carman-Ainsworth slips to 1-2 overall.