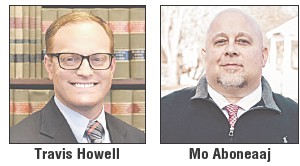 DAVISON TWP. — The Davison Township Board of Trustees are deadlocked 2-2 over the appointment of a new clerk.

If a decision cannot be reached before July 14, the Genesee County Clerk’s office will place the matter on the ballot in November and the county Republican and Democratic parties will put forth candidates to run for the position.

A special meeting has been set for 7 p.m. Monday, June 21, to make another attempt at breaking the deadlock and deciding on a new clerk. If appointed, the new clerk will serve 15 months and will be up for re-election in November of 2022.

The board is at odds over appointing residents Travis Howell or Mo Aboneaaj to fill the clerk’s position after Clerk Mary Miller resigned last month citing family health issues.

Miller, a Republican, was elected in November in a race where she defeated Howell, who was the Democratic candidate, by just 11 votes.

Trustees Matt Karr and Lori Tallman both voted for Howell, while Supervisor Jim Slezak and Treasurer Tim Green cast their votes for Aboneaaj.

Both Karr and Tallman cited Howell’s previous 2-years of board experience, his involvement in the community serving on committees and volunteering and his presence at nearly all township board meetings since he lost the clerk’s position to Miller as reasons he should be appointed.

“The clerk’s department has suffered some serious disruption,” said Karr. “The new clerk was there six months, then we lost her. The staff…had to go through a lot to train people to do their jobs. I want to limit the disruption to clerk’s department. I think Travis is the most qualified.”

Green said he attributes successes he and Slezak have accomplished for the township since taking office in November to their backgrounds in business and ‘like-minded thinking.”

“So, how did I accomplish all of these things? It’s because I’m a businessman. I’m not a career politician. I have a business degree in business administration. I’ve had the hard knocks of life,” said Green. “I have to pick the candidate with the business background, that has a business-mind, that’s been in the trenches, that has gone out there and managed individuals. That candidate is Mo Aboneaaj.

“I looked at the township and I said, ‘you know, we’re really like a bank.’ We bring money in and we expend the money out,” he said. “I can’t come up with anyone else who is the logical solution, who has the background he has.”

Tallman said she thinks both Howell and Aboneaaj are equally qualified applicants for clerk, but she said there is more to take into consideration than a business background when considering who should appointed to the job.

In addition to a business background, she cited board experience, township budget experience, public relations, customer service and knowledge of working with state and federal government as other important qualifications, in addition to putting someone in the position who will be able to run for election to the position in November 2022.

She said she also considered the endorsements given to each candidate by individuals and businessowners in the community.

“I don’t think the person we pick has to have a business background,” said Tallman. “I think you already have four people up here who can carry that weight.”

In the end, Tallman said she supported Howell for the clerk’s position.

“I pulled the vote totals from both the primary and the (general) election because I wanted to see what the voters really said about the candidates. One of the advantages we have is we have two candidates who both ran in the last election, one for the clerk’s position and one for the trustees position. I looked at electability, because the person we appoint tonight is going to have to be elected here in less than two years. I don’t want there to be continuous turnover in the clerk’s department.”

Slezak said he spent the past week and a half talking to Davison Township business owners and residents who approached him in public and by phone and email to express their opinions on who should be appointed.

“I looked at the business experience and I went to a multitude of business owners…and I learned a lot actually. I never mentioned a name when I went in, of any candidate, to any of the business owners and I looked at how they became successful, to be where they are. They came to same conclusion, about business background and experience. I came to the decision to back Mo Aboneaaj even though I’ve known Travis a lot longer. It’s about the welfare of the township.”

Township Attorney David Lattie told the board they had to make a decision at that point, with things appearing to be at a 2-2 split – both a blessing and a curse for the board.

“You’ve got two great candidates and you’ve got great points made for both,” he said. “But here comes the curse part. You’ve got a tie and if you don’t break the tie then the county will set a special election. People who aren’t necessarily affiliated with the township will choose candidates for nomination and they’ll set a special election that the township will have to pay for.”

Slezak said he thinks township residents could support either candidate and he praised both men for stepping up to be considered for a job that carries great responsibility.

“It’s a big role, there’s a lot of responsibilities,” he said. “How do we get past the impasse?”

Tallman said she “did the math” when looking at the votes from the Nov. 4 general election and the August primary and she noted Howell lost to Miller by just 11 votes – receiving 49.69 percent of the total vote.

“Both have support from the community and the voters,” she said. “It comes down to how even they are and if you go back to what the voters told us, there’s a 4 percent difference (in total votes). That’s what matters.”

After a couple of votes, the board remained deadlocked at the end of the night. At that point Lattie said the board has until July 14 to decide, so the June 21 special meeting was agreed upon to take the matter up again.