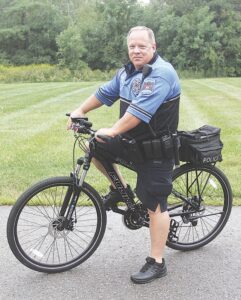 DAVISON TWP. — They say you never forget how to ride a bicycle, which is good for Ofc. Terry Coon because for the third time in his 32-year career he’s back on a bike doing his job as a police officer.

Coon and Ofc. David Dwyer, both of the Davison Township Police Department, have become the township’s first bicycle police officers and are now patrolling the neighborhoods, trails and parks in the community.

Coon said he started out as a police officer in the city of Flint and while he was there in the 1990s, he was in a gang unit. There were 20 officers in all sent to the International Police Mountain Bike Association (IPMBA) for training.

After retiring from Flint, he said he worked at Mott Community College as a campus police officer for a couple of years. He rode a bike there and said he really enjoyed it.

“People respond to it very well,” said Coon. “Then I came out here and got the opportunity to do it again.”

That opportunity came as new Davison Township Police Chief Jay Rendon decided to launch his department’s own bicycle unit when he became chief in July.

Coon, who has been with the Davison Township Police Department now for six years, said he was happy to climb back on the seat of a bike to take to the streets and trails.

“The citizens that are using the trails will see a police officer and will feel safer,” he said. “Plus, it will also discourage anyone who is out there that is up to any mischief.”

Coon said he is also looking forward to learning the trails better. Having walked the Black Creek Trail right next door to the police station, he said he still needs to get back into the Robert Williams Nature and Historical Learning Center, 10069 E. Atherton Rd., and learn those trails as well.

“Back in Williams Park, that one is so in depth, it’s difficult for us to just pull in there in a cruiser and if something happens to get back in there on foot,” said Coon. “The nice thing about this is I’ll be able to go down there and learn the trail so if something happens back there, I’ll be able to call for assistance and say, ‘go to this area’.”

He said the bike is portable and can be carried on a rack attached to the back of a police cruiser, so it is easily deployed anywhere. The other advantage to a bicycle patrol, he said, is people who are up to no good aren’t expecting to see a police officer on a bicycle – they’re looking for patrol cars.

“When they see us on a bicycle, they don’t give us a second thought,” he said. “So, you can do a lot of sneaking on it.”

Dwyer, who was in day four of his training on the day of this interview, will also be riding a bicycle in the neighborhoods and on the trails. Rendon said Dwyer is wrapping up his training and will soon be ready to take to the streets and trails.

Coon said the officers will be randomly patrolling the neighborhoods and trails.

That morning, Coon said he had been out for the first time in one of the township’s neighborhoods and said his appearance there on a bicycle turned some heads, but the public seemed receptive.

“They love it!” he said. “I think people will respond to it really well. I’m excited.”

Rendon said he also thinks the public will respond well to having a couple of officers patrolling their neighborhoods and the township’s park system on bicycles.

“It’s just one more way to keep residents safe on the trails,” he said. “It also makes our officers more accessible.”