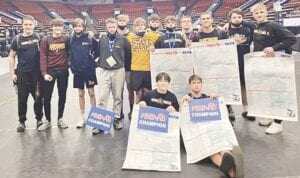 DAVISON — Davison varsity wrestling is once again king of the mat in Michigan after posting a perfect season and taking home the Division 1 state crown.

Entering the MHSAA Division 1 team wrestling finals as the top seed, Davison advanced to the state final and edged out perennial rival Detroit Catholic Central, 29-24, to claim the school’s first state title since 2006. Davison received a bye in the first-round quarterfinal, then dispatched Rockford, 62-9, in the state semifinal before facing off with Detroit CC on March 30 at the Wings Event Center in Kalamazoo.

The Cardinals defeated Detroit CC, 36-9, in a March 14 dual match regular-season finale but had to stave off the Shamrocks in a much tighter contest in the state final. Davison junior Cameron Freeman provided the difference by earning a 3-2 decision over Detroit CC grappler Anthony Walker at 130 pounds.

Davison’s grapplers also shined during the individual championships held on April 3, capturing five titles to lead all Division 1 schools in the 2021 MHSAA Finals.

A short parade to recognize the Davison Varsity Wrestling team will be held at 6 p.m., April 12 beginning at Thomson Elementary, 617 E. Clark St., and traveling east to the Davison High School campus where there will be a short ceremony to honor the team at the west entrance to the high school.