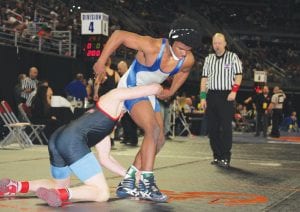 Milik Dawkins was a runner-up for the Cavaliers at the state wrestling meet.

AUBURN HILLS — The field was deep and the tension was thick at the individual state wrestling finals at the Palace in Oakland County last weekend, none of which kept Carman-Ainsworth’s Milik Dawkins (53-2) from placing fourth in Div. 1 at 160 lbs. The top eight competitors in each weight class are issued All-State accolades.

Dawkins started this event by posting technical falls against East Lansing’s Kamyab Kamali 18-3 and Romeo’s Austen Malczewski 20-5. Next up for Dawkins was an 11-2 major decision over Rochester- Adams Sam Addy that led to a 7-6 sudden victory loss in the championship bout against Detroit Catholic Central’s Myles Amine.

Demetric Hall (34-7) began the final leg of his postseason journey at 119 with an action-packed 16-14 decision over Brownstown-Woodhaven’s Xavier Graham 16-14 and a 15-8 win against Brighton’s Jackson Renicker. The senior then fell to Harrison Township-L’Anse Creuse’s Brendan Hazelton 7-4 before besting Macomb Dakota’s Tyler Sanders in 3:19 and getting edged out in the thirdplace match by Holt’s Benny Gomez 3-2. 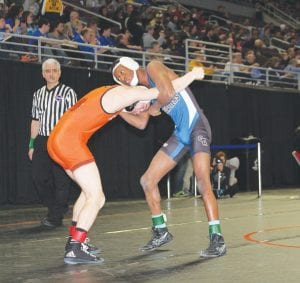 Derien Vaughn also had high hopes heading into his matches at 135 and even managed to defeat RHSC’s Aiden Pierobon 4-2 in sudden victory after losing his opening match to Canton-Plymouth’s Dylan Dwyer 13-6. That’s as far as Vaughn would get, though, because of a defeat by major decision at the hands of Joey Dombrowski 16-7.

With five wrestlers competing for Carman- Ainsworth, Ronald Roland (33-16) at 215 had his weekend cut short by losses by fall to Brighton’s Lucas Ready in 1:04 and Southgate-Anderson’s Cody Tis in 2:59. Sandwiched between these two bouts was a 2-0 win for Roland over Livonia-Stevenson’s Brad Scott.