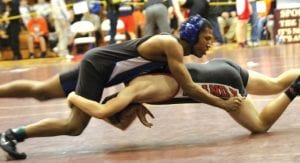 DAVISON — Milik Dawkins won the 145-pound championship, and three other Carman-Ainsworth wrestlers placed among the top six last Saturday in the County Meet at Davison High.

The Cavaliers totaled 111 points to finish seventh in the 25-team field. Host Davison ran away with the title with 328 points and Birch Run was second with 169.

Dawkins, a junior ranked fourth in Div. 1 by michigangrappler.com, beat second ranked Dominic Russ of Davison, 4-2, in the title bout. Prior to that, Dawkins had pinned Grand Blanc’s Nathaniel Shepherd in 3:36 and LakeVille’s Aaron Jackson in 1:01. He beat Clio’s Dalton Ballentine, 5-1, to reach the semifinals, then outpointed North Branch’s Hunter Turner, 17-9, to get into the title bout.

Darien Vaughn was second at 130, cruising to the final with four straight falls. He pinned Lake Fenton’s Keegan Beardsley in 1:56, Fenton’s Ryan Parks in 30 seconds, Birch Run’s Joe Damm in 4:12 and Davison’s Hunter Fifield in 3:59. Vaughn lost the title match to Davison’s Derek Humphrey in 1:42.

Jerron Thomas finished third at 215. He opened with pins in 2:24 against Corunna’s Brandon Blair and 5:11 against Montrose’s Tye Mitchell, then edged Davison’s Jake Ellis 7-6. A 14-5 loss to Jakob Luckett of Lapeer West in the semifinals dropped Thomas into the third-place final, where he beat Linden’s Austin McNeil, 13-6.

Herbie Keskes was fourth at 171. The senior pinned Davison’s Nate Nutter in 1:02 and West’s Garrett Miller in 2:20. Keskes then lost to Davison’s Mark Lange 6-5 and was pinned by Millington’s Jared Roel in 2:26.

Cameron Brown didn’t place at 135 after losing his first match, but he pinned his next three opponents to finish 3-1. Omar Sims went 2-2 at 145.