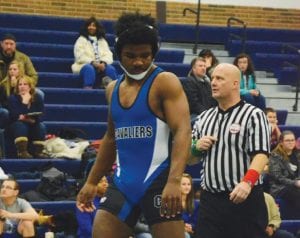 Milik Dawkins was the Cavaliers’ lone champion at Saginaw Heritage individual regional No. 1-1.

SAGINAW — In a field that featured some of the top programs in the state, including Rockford, Davison and Midland, Carman-Ainsworth’s Milik Dawkins (50-1) claimed the 160 pound title at Saginaw Heritage individual regional No. 1-1 last Saturday. With the top-four grapplers in each weight class moving on to the state meet in Auburn Hills March 5-7, Dawkins beat Davison’s Brenden McRill 3-2 in overtime to win the championship.

Prior to this Dawkins also won by technical fall over Caledonia’s Jace Rodgers 22-7 and Grand Haven’s Aaron Cummings 18-3. Coming in third for the Cavs were Jacob Yost (38-19) at 103 with victories against Hudsonville’s Kameron Kempker in 3:39, East Kentwood’s Justice Bright by major decsion 12-2 and Holland West Ottawa’s Jace Garza in :59. Yost lost his second bout to Traverse City West’s Vince Priante in 1:35, as well.

Demetric Hall (31-5) qualified at 119 in fourth with victories over Hudsonville’s Austin Fine 9-3 and East Kentwood’s Marcus Ferrell in 1:52. Hall then edged out Rockford’s Jared Bennet in overtime 11-9 in addition to dropping his second bout to Grand Blanc’s Noah Gonser in 3:35.

Derien Vaughn (39-11) managed to keep up this pace for Carman- Ainsworth at 135 with a third-place showing in which he ran over Grandville’s Mason Priest in 5:44, Caledonia’s Jared Smith in 1:25 and Priest again 6-4. Ronald Roland followed a similar path to placing fourth at 171 by besting Nick Brown in 3:07 and Grandville’s Ian Hall 6-1 in between losses to Davison’s Jake Ellis in 3:23 and Dakota Powers in 2:32.

As for heavyweight Grayden Hamilton (25-21), he fell to Grand Haven’s Chase VanHoef in 1:30 and