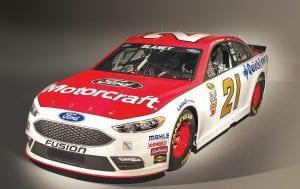 The new NASCAR Fusion, which hits the track next month at Daytona Speedweeks, is capable of producing 750 horsepower at 9,000 rpm under the current rules package.

History has repeated itself when it comes to the preparing the new NASCAR Fusion for its competition debut in February at Daytona Speedweeks.

Much like three years ago when NASCAR allowed manufacturers to include more brand-specific characteristics, Ford once again used the talents of its designers to make sure the same eye-catching components that are included in the new 2017 Ford Fusion production car appear on the racing version.

The result is an aggressive-looking race car capable of producing 750 horsepower at 9,000 rpm under the current rules package.

“There’s no mistaking we’re here to win races and championships,” said Dave Pericak, global director, Ford Performance. “And we believe the new NASCAR Fusion will be a powerful tool in the hands of our teams and drivers.

“Aerodynamics are more important than ever in this sport at the speeds these cars are running, so we used some of the best wind tunnel and computational fluid dynamics technology available to help create this new Fusion, and fortunately the Ford design team gave us a great vehicle to work with from the start.”

Ford’s NASCAR drivers will digest more information through a new digital dashboard system that is mandatory for this season. Teams can switch between as many as 16 different preset screens to display information and see information in either bar graphs, numbers or the standard gauge and needle that has been used for years. This latest technological advancement from NASCAR comes on the heels of several significant changes, including the Gen 6 model that brought brand identity back to the sport in 2013, switching to electronic fuel injection in 2012 and going to an ethanol fuel blend in 2011.

The new Fusion will debut during Daytona Speedweeks and compete for the first time in a Sprint Cup points race on Sunday, Feb. 21 during the 58th running of the Daytona 500 in Daytona Beach, Florida. That marks the first of a 36-race schedule which culminates with the champion being crowned at Ford Championship Weekend in Homestead, Florida, on Sunday, Nov. 20.

The Daytona 500 marks the first official points race for new Fusion on Feb. 21. Fusion debuted as NASCAR’s flagship model in 2006 and has won 71 Sprint Cup Series races in that time, including 21 the past two seasons.

Fusion has won the Daytona 500 four times in the last seven years, including 2015 when Team Penske’s Joey Logano won “The Great American Race” for the first time.

This latest iteration marks the third major body change for Fusion since its initial unveiling in NASCAR in 2006 and represents another step towards keeping “stock” a relative part of stock car racing.