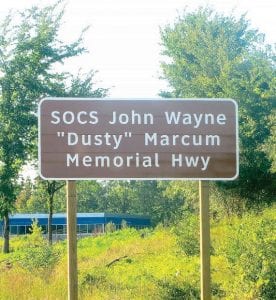 Whether headed up north or southbound, if you are driving on the interstate in Genesee County, chances are you are traveling on John Wayne Marcum Memorial Highway. Motorists on I-75 recently have noticed two brown highway markers signs placed without fanfare in mid-July. The signs are placed near the county line at the north and south ends of the county.

They are in tribute to Navy Senior Chief Special Warfare Operator John Wayne Marcum, formerly of Flushing, who died September 11, 2008 while serving during Operation Enduring Freedom 34 in Afghanistan.

Governor Rick Snyder signed the name change into law on March 15 but Marcum’s friends and supporters mounted a gofundme campaign to raise the $4,400 needed to pay for the signs. The name designation was requested through 32nd District State Senator Ken Horn by Jim Johnston, a friend of Marcum’s who graduated with him from Flushing High School. It took 15 months for the bill to pass and the governor to sign it into law, Johnston said, adding that took only a few weeks to raise the money for the signs.