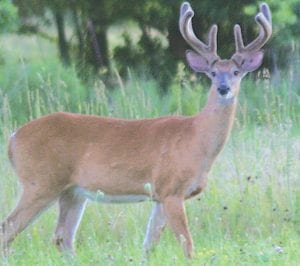 Michigan deer can now be baited after a two-year ban.

STATEWIDE — With archery deer hunting season opening on Saturday, Oct. 1, deer hunters in Michigan are reminded that they can once again bait deer and recreational deer watchers can spread bait out to draw the white-tailed deer closer for viewing.

After a long and contentious two-year period that banned baiting and feeding in the entire Lower Peninsula, the Michigan Natural Resources Commission voted 4-3 on Thursday, June 9, to lift the current deer baiting and feeding ban in the Lower Peninsula. The ban had been in place since 2008, when Chronic Wasting Disease was detected in a deer at a private deer breeding facility in Kent County.

Baiting is still prohibited in Deer Management Unit 487, the six-county Bovine Tuberculosis zone in northeastern Lower Michigan. The other counties where baiting will continue to be prohibited are Alcona, Alpena, Iosco, Montmorency, Oscoda and Presque Isle.

In its proposal, the NRC approved baiting in limited quantities from October 1-January 1. Hunters may place any type of bait, but no more than two gallons at a time, across a 10- foot by 10-foot area per hunting location. The DNR however, requests that bait not be placed repeatedly at the same point on the ground, and only placed out when hunters are actively hunting. This is intended to minimize the chance of direct and indirect exposure of deer to any unknown disease that may be present.

The NRC also reinstated recreational feeding of deer in the Lower Peninsula, with the exception of DMU 487. Property owners may place two gallons of bait on their property within 100 yards of their residence yearround. The NRC will reconsider the baiting issue again in 2014 as it continues to watch for cases of CWD.

Hunters have been upset about the ruling made in 2008, but the DNR asserted that it was following protocol as outlined in the state’s emergency response plan for CWD and immediately banned baiting and feeding of white-tailed deer in the Lower Peninsula. The NRC then passed regulations making the ban permanent, but said it would reconsider the ban in three years, giving the DNR adequate time to perform disease testing and surveillance in the state for CWD. In that three-year period, the DNR has tested thousands of white-tailed deer for CWD with no new cases detected.

Because of the large numbers of violators during the ban period, the NRC also directed the DNR to work with the Legislature to strengthen the penalties for baiting violations. A potential bill sponsor has been identified who supports establishing an escalating scale of penalties for repeat offenders, which would include mandatory hunting license revocation.

The NRC and DNR clarified what it considers to be bait, stating that bait includes “substances composed of grains, minerals, salt, fruits, vegetables, hay, or any other food materials, whether natural or manufactured, which may lure, entice or attract deer. Bait does not include the establishment and maintenance of plantings for wildlife, foods found scattered solely as the result of normal agricultural planting or harvesting practices, foods available to deer through normal agricultural practices of livestock feeding if the area is occupied by livestock actively consuming the feed on a daily basis, or standing farm crops under normal agricultural practices.”

The organizations’ definition of baiting has also been laid out, as: “to place, deposit, tend, distribute, or scatter bait to aid in the taking of a deer.” They intend that bait is scattered directly on the ground by any means, including mechanical spin-cast feeders, provided that the spin-cast feeder does not distribute on the ground more than the maximum volume allowed as described.

Even during the bait ban, it was legal to sell bait in Michigan, but illegal to use within the Lower Peninsula and Management Units as outlined above.