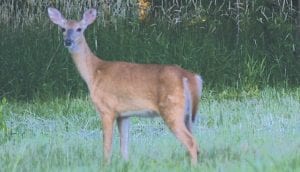 Because of an increase to the deer population in the state of Michigan, more deer management units have been opened to hunters.

GENESEE COUNTY — For local deer hunters looking for new hunting grounds to the north, take note. The Natural Resources Commission has opened a few more deer management units (DMUs) in the Upper Peninsula and Northern Lower Peninsula. The annual September hunts have also been reduced and/or combined based on complaints from October hunters that the deer they could hunt became wary after being pressured by the youth and 100 percent-disabled hunters that typically get to hunt toward the end of September. The news was announced at the NRC’s regular monthly meeting June 14 in Lansing.

In total, 72 DMUs will be open to antlerless deer hunting on public land, and 86 DMUs—-plus the two multicounty

DMUs in the Lower Peninsula (DMUs 486 and 487)—will be open on private land. A complete list of open DMUs and their quotas will be published shortly in the 2012 Antlerless Deer Hunting Digest.

Hunters are reminded that antlerless deer license applications go on sale July 15 at all license agents and online at www.michigan.gov/huntdrawings.

The NRC also voted to restrict hunters in DMUs 486 and 487 to a maximum of 10 private land antlerless licenses this season, down from five per day in 2011.

The annual special statewide hunts for youth and 100 percent-disabled veterans will take place Sept. 22-23. The early antlerless season on private land in portions of the Lower Peninsula is being reduced from five days to two and also takes place Sept. 22-23.

“There have been increasing concerns from some members of the hunting public that the recent expansion of September hunting is causing deer to be more wary during the traditional seasons,” Rudolph said. “By reducing and consolidating the September seasons, we’re addressing those concerns while maintaining opportunities for youth and disabled hunters throughout the state and for early harvest of antlerless deer on private land where it is most needed.”

In addition, the NRC changed conditions on special crop-damage permits in accordance with recent legislation. Public Act 65 of 2012 allows up to 15 authorized shooters on Deer Damage Shooting Permits. In the past, special authorization was required to allow more than three shooters to be designated per permit.

The Commission also reaffirmed that naturally shed deer and elk antlers may be legally collected, possessed and sold. — Lisa Paine