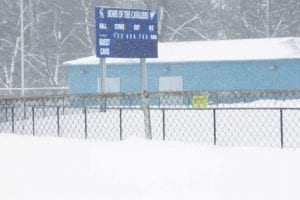 LAPEER – Monday marked the first day of competition for boys’ golf and girls’ tennis in the Lower Peninsula. All other sports began competitions on Wednesday.

We all know that wasn’t likely to happen with snow still covering all area playing fields. With the historic winter that we have all endured, this is going to be an unusual spring season that is likely going to be shortened by more than a few weeks.

Practice officially kicked off for spring teams on Monday, March 10 per Michigan High School Athletic Association rules, packing area gymnasiums and indoor facilities with high school teams vying for space. Lake Nepessing Golfland in Lapeer was filled with Lapeer West boys’ golfers on Tuesday and owner Steve Carlson said Lapeer East, North Branch, Imlay City, Oxford and Davison golfers are also taking advantage of the driving range. It’s still way too early to settle on starting lineups, but the kids are anxious to get outside and get swinging.

Carlson said he has plowed the driving range four times this winter to retrieve the balls that golfers are hitting from the heated tee area. Several of the golfers thumbed their noses at Old Man Winter on Tuesday and wore shorts and short-sleeved shirts on the unheated tees during the 40-ish degree afternoon that was followed last Tuesday night into Wednesday by Winter Storm Vulcan, which dumped anywhere from five to seven inches of new snow on the area and allowed yet another polar vortex to put us in the deep chill with wind chills ranging from -10 to -15. That was fol- lowed by a near-50 degree Friday, but the roller coaster ride continued into the early part of this week with temperatures back near the freezing mark during the day and lower at night.

According to the National Weather Service, Metro Detroit is a mere 2.6 inches shy of shattering the snowfall mark set back in 1880-81 of 93.6 inches. Flint’s snowfall is 81.8 inches, just shy of the 1974-75 season mark of 82.9 inches and the Great Lakes are currently 92.2 percent covered with ice and we are also closing in on an alltime record of 94.7 percent coverage set in 1979.

Now for the good news, because there is always a silver lining in every dark cloud. Predictions going forward say that April and May will be warmer and wetter than March. April’s average high is predicted at around 52-degrees, with the first three weeks wet and stormy. That’s not the good news, because that will simply saturate still-frozen fields. The final two weeks of April promise a warm mix of sun and some showers. Here’s hoping that prediction doesn’t fall short.

High school schedules have already been pushed back to March 27 as the projected start for baseball, softball and soccer, but that’s also pretty iffy. Lapeer West coach Tim Bradley said the annual Lapeer Tuneup, which traditionally kicks off the golf season for many area teams, is scheduled a week later this season, April 24, which should allow the golf course more time to drain and dry.

If you are a high school team heading to warmer climes to get in some outdoor playing time over the spring break, let me know. Send the details — and of course the photos — to Sports Editor Lisa Paine at lpaine@mihome-