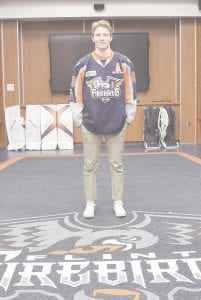 Ty Dellandrea, a 17-year-old player with the Flint Firebirds, demonstrates his authentic and humble character on a daily basis, maintaining his obligations with the team and the community that supports him. Dellandrea is expected to be a first-round draft pick in this year’s NHL draft. In the meantime, he’s happy where he’s at with the Firebirds and the family with whom he’s been boarding for the past year.

BURTON — At just 17 years old, Ty Dellandrea is already being considered as a possible first-round draft pick for next season’s NHL draft. He’s been playing for the Flint Firebirds since being selected by the team in the first round of the Ontario Hockey League draft last year. His exceptional athleticism and bright future are overshadowed only by his genuine and modest demeanor, despite his extraordinary circumstances as a teenager. These extraordinary circumstances, with most other young men, may generate a sense of privilege, a personality or entitlement that exceeds the size of their britches. But not in Dellandrea. Not even close.

“I started playing hockey a little bit later than others, I was probably about 5 or 6, maybe 7 years old,” said Dellandrea in his soft-spoken and deferential tone. “I started in my back yard, when my dad built a rink for me back in Toronto.”

When asked if there was a specific moment that brought about the realization that he may be a little bit better than the peers he played with, he smiled and approached the question with hesitance and caution.

“Well,” he laughed, “I guess maybe when I was named captain of my team in Minor Peewee. So, I went from playing in a small, hometown area to the highest level and was named captain, so that’s kind of what gave me an idea that maybe I was a bit…” he trailed off, forgoing the use of the word “better,” again displaying his humility.

Being drafted in the OHL last year, at age 16, says Dellandrea was “a huge difference, and just phenomenal.” But, after the excitement began to wear off, Dellandrea said he realized quickly how much of a change this would represent in his life, particularly having to move so far away from his family, with whom he has a very close relationship.

“The team I had been playing for in Toronto was only 10 minutes away from house, so my mom and dad were a little (apprehensive) about me moving so far away, but they’ve always been really supportive,” he said. “There were a lot of changes, and being drafted was just such a great experience. I’ll remember that day for the rest of my life.”

Moving to the States meant a whole new life for Dellandrea. He was able to move in with a billet family, which is a family that offers room and board to junior ice hockey players (or under- 20 athletes from sports such as soccer) who leave home to join elite teams in other towns. Dellandrea said he hit the jackpot with his billet family, the Hamo family, who lives in Grand Blanc.

Along with his busy schedule of training and competing with the Flint Firebirds, Dellandrea and the majority of his teammates are also expected to fulfill their education, with Dellandrea attending Grand Blanc High School and taking a number of online courses. And, if that weren’t enough, Dellandrea and his team are also expected to fulfill a number of community-oriented events and service, including teaching young children how to skate and the fundamentals of hockey. He also attends chapel every Tuesday at the Dort Federal Credit Union Event Center, maintaining his faith and upholding the religious tenets with which he was raised.

“The fan base and community that’s grown around the Firebirds, even in the past year, it’s been pretty amazing,” said Dellandrea. “We want them to know how much we appreciate them and that we couldn’t do this without them. I want to thank them, because they’re just as much a part of this team as we are.”