Demo/rebuild underway at Speedway on Linden 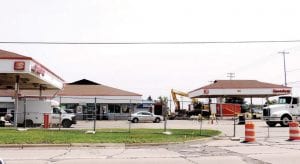 Demolition equipment moved in on Monday to raze Speedway at Linden and Corunna roads. The existing building has pumps on the west and south side of the building. The rebuild will have all pumps in one location. Right, Speedway submitted 2-D visual renderings as part of the site approval process to show what the new station will look like.

FLINT TWP. — Demolition began Monday on the Speedway gas station at Linden and Corunna roads, making way for a total rebuild of the gas station and convenience store.

The project is expected to take about three months to complete, according to a site plan review approved in mid-December by the township Planning Commission.

Plans calls for demolition of the existing building and construction of a new structure, new pumps and tanks and removal of access from Linden Road,

Planning Commissioners unanimously approved the plan, saying it would be an asset to the community and lessen traffic congestion on that busy corner.

It is not known how long this station has been in business but this is a typical rebuild for Speedway, said Stefanie Griffith, communications manager for Marathon Petroleum Corporation in Findlay, OH.

The new 3,900 square-foot station will be open around the clock and will have eight consumer fueling positions, Griffin said in a press release. The store will feature an expanded selection of hot and cold beverages as well as prepared food products including pizza, breakfast sandwiches, hot lunch sandwiches, subs and cookies. 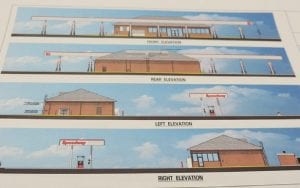 Griffin did not comment on the status of existing employees but said that anyone interested in working at the new store can apply online at www.speedway.com.