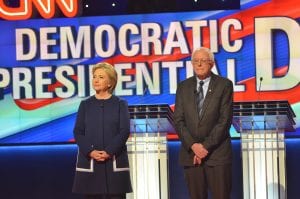 FLINT – Cheryl Brisendine-Pavkovich says she wants a Democratic presidential candidate who “feels the same anger and frustration I do when I see the middle class being told ‘we all have to share the sacrifice.’”

It was with that fire and resolve that the Gaines Township woman listened to the debate between Democratic presidential hopefuls Sunday.

The exchange involving former Secretary of State Hillary Clinton and Sen. Bernie Sanders took place at The Whiting in Flint just two days ahead of the Michigan primary.

Sanders entered the arena with a trifecta of big wins, including the Kansas and Nebraska caucuses Saturday – the same day the Detroit Free Press reported that statewide polling indicated Clinton has a commanding lead here – and the Maine caucus Sunday.

Clinton, who bested Sanders in the Louisiana primary on Super Saturday, remains the front-runner with 1,130 delegates, as compared to Sanders’ 499, heading into Tuesday’s primaries here and in Mississippi. Primary results were not available by press time.

Sunday in Flint, both Democratic nominee hopefuls laid out their plans for tackling some of the country’s biggest concerns, including gun violence, crime, educational opportunities, crumbling infrastructure, climate change and, of course, the economy and, in particularly, how to regrow the middle class and support small business while allowing big business to remain competitive in a global market.

Sanders called out his opponent for supporting the North American Free Trade Agreement, which he says has led to the closure of 60,000 factories domestically since 2001.

“American workers should not be forced to compete with people in Vietnam making 65 cents per hour,” he said, vowing to “tell corporate America … they will have to invest in this country.”

Sanders shot back that he opposed the “Wall Street bailout.”

If everyone had voted with Sanders, Clinton said, the auto industry would likely have collapsed, taking 4 million jobs down with it.

In one of many instances where Clinton referenced the legacy of her husband, former Pres. Bill Clinton, the candidate noted that the 1990s were an era of increased manufacturing jobs, low unemployment and increases in wages and benefits for much of the middle class.

She added that Sanders opposed the Import Export Bank that has, in recent years, provided $11 billion to support business. Much of that money goes to small businesses, including 176 in Michigan.

Sanders said he opposed the Import Export Bank because 40 percent of the money goes to Boeing Corporation, with additional funding going to other large, profitable corporations that have “shut down in American and gone abroad to exploit poor people.”

Clinton said countries across the globe offer similar support to their large corporations.

“If we are going to compete in a global economy, we can’t let every other country support their companies and we take a hands-off approach,” she said.

Both candidates spoke out against systemic racism that has brought about inequalities in educational and employment opportunities, and harsher treatment in the criminal justice system.

Flint resident Rob Allen said he felt the debate had no clear winner, but it was “full of issues,” a contrast to the “mud-slinging” of recent Republican debates.

“I feel like Sanders is a lot more assertive, which is a good thing,” he said, adding that he thinks Sanders is “gaining ground (and) getting his message heard.”

“I believe our next president’s top priority should be the economy, mainly income inequality,” he said. “I feel Senator Sanders is the only candidate that will give this issue the spotlight it deserves.”