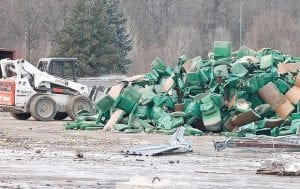 Discarded theater seats and other debris are piled in the parking lot of the former Showcase Cinema building on East Court Street in Burton. Demolition of the building, now owned by Serra Works of Court Street, LLC, is expected to take one month.

BURTON — The final curtain is being lowered on Showcase Cinemas. Crews began demolishing the vacant building January 6, and the process is expected to take about a month to complete.

The former theater opened in 1980 and was once the only multiplex movie theater in Genesee County, before a second Showcase opened in Flint Township, off Corunna Road.

Flint native Michael Moore, whose 1989 documentary “Roger & Me” painted a picture of life in Flint after General Motors factory closures put 30,000 people out of work, hosted a premiere at Showcase Cinemas when the movie was released.

“Today they began tearing down my favorite cineplex in Flint, MI where Roger & Me premiered on all 14 screens,” Moore tweeted the day demolition of the building began.

The property was purchased in September 2015 by Serra Works of Court Street, LLC.

“Quite frankly, I purchased it because it’s a decent investment,” Joe Serra, president of the automotive group told the Burton View at the time. “It’s got good freeway exposure and more than 20 acres. It just has a lot of potential.”

Future plans for the property have not been announced.

The former theater, with 64,398 square feet, employed approximately 40 full- and part-time employees. It closed in 2007 after the opening of NCG Cinemas in Grand Blanc Township, which caused the theater to lose customers and profit. — Gary Gould and Paula Schmidt contributed to this article.