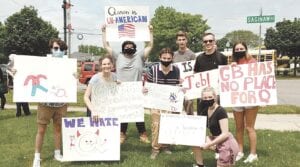 There were chants of “No More Q” and “Protect Our Schools.”

On Monday, May 24, a demonstration outside Grand Blanc High School drew a crowd of about 100 people, some supporting school board Trustee Amy Facchinello, others calling for her resignation or recall.

Retired teacher Patty Duffy organized the demonstration after a Time magazine article alleged that Facchinello is a Q-Anon supporter. Q-Anon is a network of individuals who share many views and theories, most notably that a cabal of Satan-worshipping pedophiles control the deep-state government.

“I don’t think the people (who voted for Facchinello) are aware that she’s a supporter of Q-Anon,” said Duffy. “It’s not in the best interest of our schools, our community or our democracy. Once Q-Anon is on the school board, where else is it? Different opinions are great. But you can’t make solid decisions with different realities.”

Facchinello’s supporters claim the movement against her is an attempt to silence the conservative voice.

Jennifer Kozik said she drove to Grand Blanc from Bloomfield Hills because she supports free speech.

Grand Blanc High School senior Lucas Hartwell, who wrote to Time and sparked the magazine’s article, was one of many students who joined in the protest.

“We can’t have misinformation in the schools,” Hartwell said.

“We don’t want the influence of Q-Anon on our school board,” Edwards said.

Facchinello also attended the demonstration. She said she was touched to see “such a large turn-out of voters who support me.”

“It speaks volumes about our community,” she said. “It shows how tight-knit we are. It shows the willingness to come together and fight for our kids.”

Duffy said a recall effort is underway, but cannot be acted upon until at least August. She said those who oppose Facchinello are urging her to resign before then.

“Her ideas are not based in reality and we are encouraging her to step down from her position on the school board,” Duffy said. “If she does not step down, we will begin a recall campaign in August.”

Facchinello said she has no intention of stepping down.

“I’m going to keep representing the people who voted for me,” she said. “They deserve a seat at the table.”