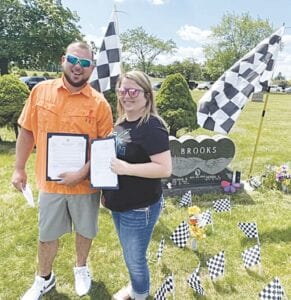 GENESEE COUNTY — Dennis Brooks was the first person to ever lose their life at Genesee County’s Auto City Speedway.

Brooks, 35, at the time, suffered a heart attack in his second race of the night on June 9th, 2001. Brooks left behind his wife Denise, and two children Kyle and Kelsey.

This past weekend, family gathered for a memorial service and tribute to honor the 20th Anniversary of Brooks’ death at Crestwood Cemetery in Grand Blanc Twp.

In addition to being an avid racer, Dennis was a man of hard work, determination, and was all about his family.

Brooks’ children were presented with the tribute letters at the Memorial service.

Dozens of family members including Dennis’ brother and sisters: Scott, Wendy and Tammy were present with checkered flags, orange balloons and ribbons. 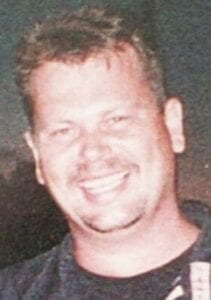 Brooks is buried next to his parents’ Helen and Bruce Dimond, and sister Vicki O’Brien of Genesee Township.

At the end of each race, Dennis Brooks would give the crowd a big “thumbs up”. So, the family took a group photo to do just that.