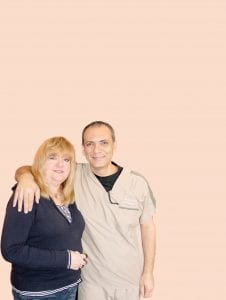 GRAND BLANC — For most, smiling is an every day occurrence. Flushing resident Hildy Reid however has hidden her smile from the world for more than 20 years due to dental problems plaguing her since she was a teenager.

Now with the help of Dental Care Team in Grand Blanc though, Reid is learning how to smile and love life all over again.

For the past four years, Dental Care Team has hosted the Dentistry from the Heart event which offers the community a day of free dentistry.

In conjunction with Dentistry from the Heart, Kristi S. (the name she goes by), a marketing and financial coordinator for Dental Care Team, said they try to do something extra and this year decided on giving one individual a free smile makeover.

In total, 20 people applied for the chance to win the makeover, including 49-year-old Reid.

“We were at the Deer Widows Weekend in Birch Run and my sister (Connie Compton) heard on the radio about this smile makeover and she looked into it,” Reid said.

Compton said she researched the contest online and wrote in about how her sister deserved the makeover.

“We tried to get her teeth fixed a few times, but it was too much and we couldn’t afford it.”

The pool of candidates was narrowed down to 10 individuals and all of them meet with Dr. Ibrahim Jarjoura for a dental exam. Reid was chosen as one of the 10 people and showed up two hours early for her appointment because she was scared her car would break down or that she would be running late.

Once all the meetings were finished, Jarjoura picked Reid for the makeover without any hesitation.

“You look at this woman and see she has had dental neglect for such a long time and her teeth have just broken apart basically and it was affecting her health,” Jarjoura said. “I knew that with the bad condition of her teeth and her genuineness that this would be a nice experience for her.”

Kristi S. said calling Reid to tell her she had won the smile makeover was an experience neither of them will ever forget.

“She was crying, I was crying and I think everyone else in the office was crying too,” Kristi S. said. “It was like someone had told her she just won a million dollars.”

They began work on repairing

Reid’s teeth back in November and are just a few weeks away from completing the makeover.

In total, Jarjoura said they treated Reid for infections and diseases in her gums and teeth, filled cavities, fitted her for upper dentures and a lower partial denture, shaved down her teeth and have done whitening treatments.

Throughout the entire process, Reid, who use to be

“deathly scared” of dentists, credits the entire staff at Dental Care Team for being welcoming, comforting and accommodating as they gave her life new meaning.

“There is life for the first time,” Reid said. “I am turning 50 this year and this is something I wanted for 30 some years. I have seven kids and lots of pictures everywhere, but I am not in them. My husband and I have been married 21 years and he told me this is the first time he has seen me smile.”

Although happy and grateful for the experience, Reid admits it has not always been easy on her. In the beginning, she said she questioned why she went through with it all and then with one look in the mirror she remembered.

“The first few days I missed my teeth and I couldn’t sleep or stop crying,” Reid said. “And then I looked in the mirror and I wish I knew how to describe it. I wasn’t me anymore. I was a woman with teeth.”

Compton, overcome with emotion, said how much this experience has really changed her sister and given her a new outlook on life.

“I worried with her teeth and her being so down all the time that she would die young,” Compton said. “It has really given her self-worth and she is beautiful. She has started loving herself and I don’t think she did that before.”

Today, instead of hiding out in her house, Reid is smiling more, going on field trips with her son’s school, has gotten a job and has set a goal to have a family picture taken to replace the one and only family picture they have had done.

For their part in the makeover, Jarjoura said giving back to the community is something Dental Care Teams loves to do and will continue to do in the future because of people like Reid.

“The smile, affection and how happy Hildy is,” Jarjoura said,” that is what it is all about.”

To Reid however, Jarjoura and the entire staff at Dental Care Team are angels sent to her to give her a miracle.

“Even though the world is so hard, there are still angels among us and that is what they are, angels,” Reid said. “This gave me a reason to be alive and life can be good I am finding out.”

Dental Care Team is located at 8189 S. Saginaw Street. For more information visit their website at www.dentalcareteam.com or call 810-695-1151.