Departing board members given emotional sendoff 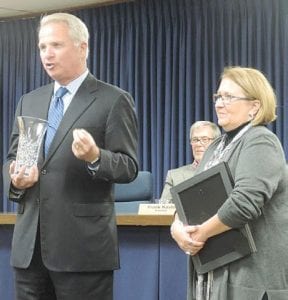 FLINT TWP. — Four people joined the township board this week which also meant that four people are leaving.

The board dedicated a portion of its meeting Monday night to say farewell and to give proclamations and parting gifts to departing board members: Clerk Kim Courts, Treasurer Marsha Binelli and Trustees Belenda Parker and George Menoutes.

Genesee County Prosecutor David Leyton was on hand to help with the sendoff for Courts and Menoutes.

A former township trustee and clerk, Leyton said that he has known Courts since she succeeded him as township clerk when he left to become prosecutor. He also said thought it fitting that Courts was chosen by her peers as the 2009 recipient of the Loretta Manwaring Award. Leyton succeeded Manwaring as township clerk.

Supervisor Karyn Miller read a board proclamation about Courts citing her professionalism, grace knowledge and experience. She was credited with overseeing the Codification of Ordinances in 2010, and streamlining and modernizing the election process including consolidation of precincts and relocation of polling in 2012. 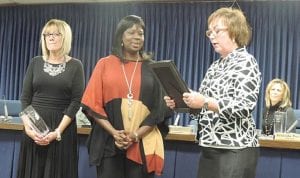 Trustee Barbara Vert could not hold back the tears during a farewell tribute to 12-year trustee Belenda Parker.

On behalf of the board, Leyton presented Courts with a Vera Wang crystal vase inscribed with her name and years of service, 2004-2016.

Courts is the newly elected county commissioner for the fourth district and will begin duties at the first of the year.

Leyton also spoke warmly of his longtime relationship with Trustee Menoutes, who could not attend the meeting but was represented by his adult children Alexis and Jamie.

Leyton called Menoutes a “brilliant planner” who made a tremendous and historic contribution to the township by overseeing and encouraging the great business growth along Miller and Linden Roads that provides a tax base to this day. Menoutes served as a trustee for more than 20 years and also served on numerous other township boards including the Planning Commission, Fire Commission, Board of Appeals and Board of Review.

He lost his bid for reelection by just a few votes. Trustee Frank Kasle said don’t count Menoutes out for a reelection bid in 2020, noting that a township road was named for Menoutes the last time he left office when it was believed that he was retiring. Supervisor Miller said she expected to Menoutes to keep busy in a variety of other roles in the township. Leyton presented to Menoutes’ children a vase inscribed with his name and Lifetime Public Service Award. Treasurer Binelli and Trustee Parker also received proclamations and inscribed crystal vases. Binelli lost her bid for reelection after serving four years as a trustee and serving previously as a deputy supervisor under Doug Carlton. Parker said she did not run for reelection because she and her family are moving out of state for her husband’s job. Trustee Barbara Vert struggled not to cry during an emotional tribute to Parker whom she called a mentor and a friend. Vert pledged to continue “the good you started here in 2004.” Courts and Parker both read farewell statements thanking many people for their friendship and support. Menoutes children also commented about their father’s abiding passion for service to the township.