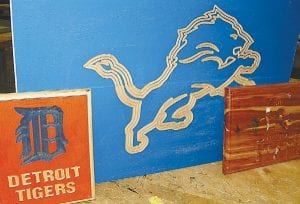 FLINT TWP. — Spending the past school year working on automated computer design equipment gave a big boost to his plans to become an engineer, said Shaquelle Polacek, a senior at Carman-Ainsworth High School, who plans to enlist in the Navy first.

Polacek was one of the most avid students in C-As new Design and Build class launched in September, said Brian Klein, a woodworking instructor who co-taught the class with Gerald Demick, who also teaches algebra, pre- engineering and drafting and design.

Students learn to design on a computer then bring it to life in two- and three-dimensional designs that can be done in wood, plastic or aluminum, said Klein.

During a recent event at the high school, showcasing the importance of training in Science, Technology, Engineering and Math (STEM) subjects, Polacek explained to visitors how the design equipment works. He also showed a 30 x 25 inch plaque made of cedar and carved with the CA logo and mission statement that he and classmate Grant Roe made. It was presented as a gift to Superintendent Steve Tunnicliff who asked that it remain at the high school for public display. 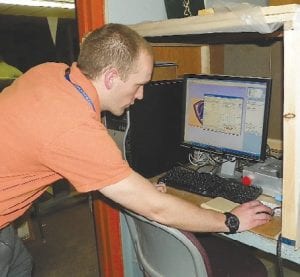 Also displayed in the Design and Build classroom were numerous carvings made by students – many bearing logos of professional sports teams and colleges.

Klein said that the multipurpose computer driven CNC Pro Plus Shark Routing System can do more than make plaques. It also can be used to do furniture trim work.

Polacek said he made several items during the year-long course including salt and pepper shakers for his mother.

Customized hoop trash cash cans are another demand item that students made and sold as a class fundraiser, he said.

“This is not your father’s woodworking class,’’ Superintendent Tunnicliff said at a recent board meeting about the technological learning opportunities for students now being provided in the Design and Build program. 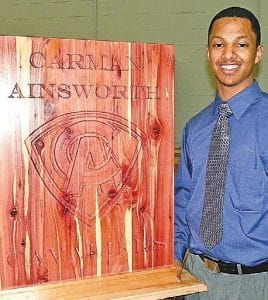