Designer to report on industry technology trends at convention 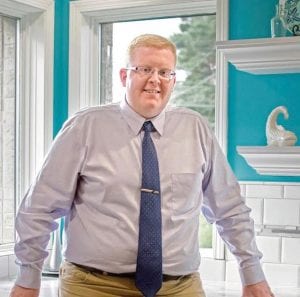 Jacob Smith, 26, of Flushing has been named to the National Kitchen and Bath Association’s “30 under 30″list.

FLINT TWP. — Jacob Smith, a Baker College graduate, has been named to the National Kitchen and Bath Association (NKBA) “30 under 30” list for his kitchen design wizardry, exceptional work ethic and dedication to community service, according to a press release.

Smith, 26, of Flushing, is the youngest of eight designers at Starline Kitchen and Bath Gallery in Flushing.

The “30 under 30” nominees will be divided into groups to present research on assigned topics to industry peers at the NKBA 2017 Kitchen & Bath Industry Show in Orlando, Florida, in January. Smith’s group will focus on new industry uses of technology.

“We’re looking at technology that can be used in the showroom to facilitate the design or serve as a sales aid, as well as ways technology can be used in kitchens and bathrooms to assist people as they age,” Smith said. “I’m particularly interested in the progress of virtual reality that enables a client to view a kitchen, bathroom or entire house in the design stage. I think it’s the next big innovation in our industry.”

This national award comes only two years after Smith graduated from Baker College where he earned three degrees, the first of which he started as a student at Flushing High School, Flushing. He took two college classes as a high school senior – paid for by his high school – through the dual enrollment program with Baker College. He completed an associate degree in computer aided design 18 months later and continued on to earn another associate degree and a bachelor’s degree in technology.

Smith said the combination of the degrees gives him a skill set that is perfect for excelling at the creative and exacting work of designing kitchens.

“Jacob is a credit to Baker College and a great example for his peers,” said Wen Hemingway, MBA, CTP, Baker College of Flint president. “He has chosen to work hard and to use his talent to make a difference in his community and his profession.”

Smith’s commitment to better his community was a factor in the decision of Starline’s management to nominate him for the NKBA award. He is treasurer of The Thomas Smith Memorial Foundation, established in honor of his brother who died at age 18 years of an undetected heart condition, and a board member of the Flushing Parks and Recreation Committee. Smith also co-hosts a weekly home improvement radio show on 1470 WFNT-AM with his father who is a contractor.

“My success should demonstrate that there are jobs for those who are good at handson work,” he said. “Get the education and the degree, and follow your passion.”

Starline serves customers primarily in Mid- and Southeast Michigan and is celebrating its 50th year in operation.

For more information about Baker College, contact Kevin Pnacek in the admissions office at 810.766.4000 or kevin.pnacek@baker.edu or visit www.baker.edu.