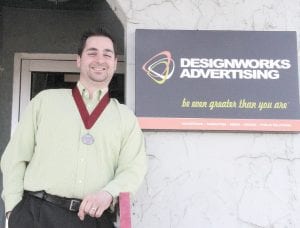 “I am very humbled by this recognition, and will continue to work hard to live up to the magnitude of the award the rest of my career”, said McDonald.

The award was established nationally in 1959 to honor an outstanding member of the local advertising community. Recipients are nominated by their peers and selected by a panel of judges. It recognizes one who contributes to the advancement of the advertising industry, shows consistent creative ability, and contributions to their company, and the community.

Since founding the ad agency in 1998, he has been honored to receive more than 25 ADDY® Awards, six Citation of Excellence Awards, two Healthcare Marketing Awards, two Aster Awards, and one National President’s Award for marketing excellence from the Boy Scouts of America. In 2006 and 2007 the agency was recognized by the U.S. Department of Housing and Urban Development in Washington D.C. for it’s work with the City of Flint and the marketing efforts for the city’s Renewal Community and economic development. The campaign was rated number one nationally among all other Renewal Community cities. And lastly, in 2010 Designworks Advertising was voted Best Advertising Agency in a View Newspaper reader poll.

Maintaining an independent advertising agency isn’t easy. Building it, growing it, and nurturing it for 13 years is a worthy, but rewarding feat. The agency has evolved creatively and strategically, implementing business-changing ideas on behalf of local and regional clients. Beyond his stewardship of Designworks Advertising, McDonald has always contributed his time and talent to several local and national organizations.

His personal commitment to the advertising industry and the community is evident as well. He has been active in the local advertising club (AAF Greater Flint) and the AAF since 2001. He has been on the AAF Greater Flint Board of Directors since 2002. He was ADDY® Chair from 2003-2006, and served as ad club president from 2006-2009. As President he re-established the student scholarship award, completed a five-year strategic plan, initiated the name change from FAAF (Flint Area Advertising Federation) to AAF Greater Flint giving the club a more national brand, and helped establish the club’s annual public service project.

He also is very involved in the AAF District 6, which governs all the local ad clubs in Michigan, Indiana, and Illinois. He has served as State Director – Michigan for two and half years, District ADDY® cochair in 2010, District Fall Conference co-chair 2008, National Student Advertising Competition committee since 2007, and currently serving as District Lt. Governor – Michigan. He is slated to be the AAF District 6 Governor-elect later this year.

McDonald is a former Grand Blanc Chamber of Commerce Board of Director member, and former Grand Blanc Family Fun Festival committee member. Through the AAF Greater Flint Public Service campaign he has worked with the Boys and Girls Club of Greater Flint and the Habitat for Humanity Genesee County. He and his family volunteer and donate to the American Cancer Society’s Relay for Life (Grand Blanc), the University of Michigan, and Grand Blanc Community Schools.