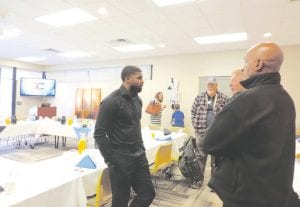 Don Carey, NFL player, spoke at the Genesee Career Institute’s Weekdays Restaurant and Conference Center, signed copies of his book, posed for photos with GCI culinary students who prepared the meal, and signed a souvenir banner hung on the wall in honor of his visit.

Carey came to town last week to attend a fundraiser at the Genesee Career Institute (GCI) to support his REECH Foundation and also to discuss future partnerships in the Flint area.

Carey’s visit was hosted by Genesee County Clerk John Gleason and Heidi McAra, chief executive officer of the YWCA of Flint, who have collaborated to provide a pioneer federally grant-funded program for abused women at Flint’s Emergency Women’s Shelter.

REECH was founded by Carey and his wife Lakeisha, a children’s defense attorney, to work with inner-city youth – focused mainly on STEAM (Science, Technology, Engineering, Arts and Math), physical wellbeing, health, social and moral responsibility, vocational and collegiate preparation. The organization sponsors football/educational camps primarily in the Detroit area where Carey has played for the Lions for eight years but is now a free agent. He lives in Virginia. 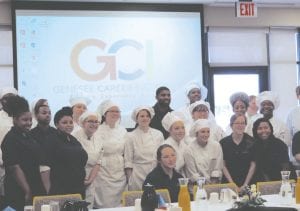 “My hope in founding this foundation is that we would be able to extend our reach to different parts of the country,’’ Cared said.

He is socially active in many arenas.

Last fall, Carey spearheaded a 100 Men campaign targeting domestic violence prevention. He asked $100 men to donate $100 each and exceeded that goal. Carey decided to continue the effort. Donations still are being accepted at www.classy.org/campaign/100-men/c139587 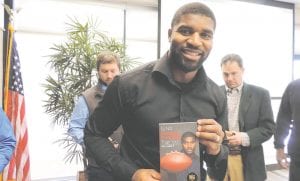 After meeting with Carey and his wife in Detroit, Gleason said he and McAra were so impressed, they wanted to bring him to Flint to support his 100 Men Campaign and to discuss other partnerships.

In his presentation at the GCI, Carey raised a few eyebrows by quoting Adolph Hitler who said “He alone, who owns the youth, gains the future!” Carey uses the quote to make a point. The German dictator’s words are a sobering reminder that unless positive people step up to guide and shape youth, people who are a negative influence will do so instead, Carey said.

Carey, 31, was the Detroit Lions’ 2016 nominee for the prestigious Walter Payton Man of the Year Award, which recognizes a NFL player for his community service and other positive off-field activities. 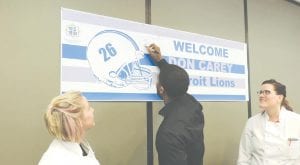 Drawing from his own hardship experiences growing up in Grand Rapids, Carey also has written an inspirational book titled “It’s Not Because I’m Better Than You!” published in 2016 and sold at amazon. com and other booksellers.

He wrote it for young people but has received the most feedback from adults who saw themselves in the book. It inspired one man to stop smoking weed and quit his dead-end job to find a better one, Carey said

All proceeds from book sales are put back into REECH programs, he said.

Donations to the Don Carey REECH Foundation can be made online at www.unitedcharitable.org/program-daf/the-don-carey-reech foundation