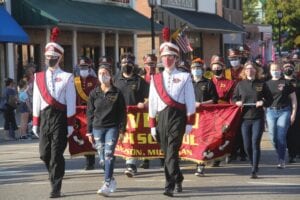 (Photos at immediate right) As has been the case all year, Davison High School had to make do with the cards it was dealt for the 2020 Homecoming. A small parade (by usual standards) was held to mark the annual tradition. The DHS Marching Band (shown here), cheerleaders, dance teams and cars carrying the homecoming king and queen candidates rolled along Main Street, joined by the State Champion Davison Varsity Football team (also pictured). At Cardinal Stadium, the king and queen were crowned (see photo in today’s Index), but there wasn’t a football game this year after the Cardinals’ opposing team — Saginaw Heritage High School — was quarantined just days before the big game. Photos by Gary Gould 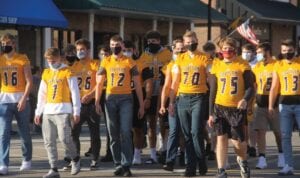 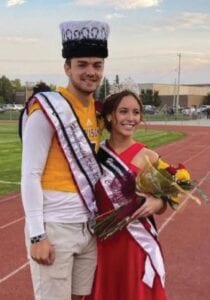 The 2020 Davison Homecoming King and Queen were crowned after the parade, Oct. 9. They were seniors Brendan Sullivan and Mallory Morton. Mr. Congeniality was Parker Arnold and Miss Congeniality is Regan Snyder. Photo courtesy of Davison Community Schools