Kyle Robinson, of Edward Jones & Associates in Davison Township, tied balloons to each of the signs on May 16. Photos by Gary Gould

DAVISON — A group of parents gathered the morning of May 13 on State Street, north of the railroad tracks, to place 395 signs bearing the names of graduating Davison High School seniors in an open lot as a salute to the Class of 2020.

Organized by parents, with Lesley Howe of Firecracker Marketing and Promotions providing the signs, and volunteers led by Davison Mayor Tim Bishop, the group helped put up the signs to recognize the senior class, who will miss such graduation activities as commencement, prom and honor night because of the COVID-19 shutdown. The property owner also provided the land free of charge.

Howe said someone approached her about doing something for the DHS seniors, so she got to work on recruiting the four sponsors of the effort and had the signs made with money she raised. The sponsors were Hank Graff Chevrolet, Fernco, 67th District Court Judge Jennifer Manley and Dort Financial Credit Union.

“I feel so proud that we just ran with it and just got it done,” said Howe. “It was heartwarming and overwhelming to know something like this could mean so much to everyone.” 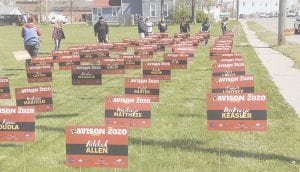 Volunteers put 395 signs bearing the names of graduating Davison High School seniors in an open lot along M-15 as a salute to the Class of 2020.

Kyle Robinson of Edward Jones & Associates in Davison Township came by with volunteers on May 16 and attached balloons to each of the signs to show his support for the seniors, who won’t have a prom, commencement or honors night because of the COVID-19 pandemic.

“(The seniors) missed out on prom, their open houses,” he said. “I wanted to do something to show that camaraderie the Davison community is known for. It just made sense.”

He said VGs Grocery in Davison Township helped with the purchase of the balloons.

Linette Duffie of Davison said she helped out at the site with her daughter, Jade Mills, to do something to show support for the seniors at DHS.

“I have a senior grandson; I’ve just been helping in any way I can to help give the seniors some type of good memories. This week it was helping with the signs,” she said. “We are still hoping the school district does a face to face commencement ceremony.”

Duffie said she thinks it’s heartbreaking knowing the memories the seniors are missing out on, but she added the parents and families still have faith, that between the school district and the parents, they will pull off something “grand” once the restrictions lift.

Howe said she hopes to do some contests involving the signs and social media, adding she’d like to see gift cards awarded as prizes.

“We want to have some fun with it,” said Howe. “It’s been a real collaborative effort.”