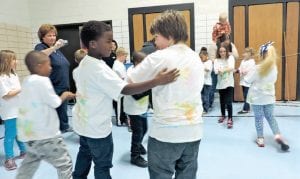 Above, after a brief workout in the gym and a Fund run through the hallways, the students took turns dusting each other with colored cornstarch.

FLINT TWP. — The Parents Club at Dillon Elementary School transformed its annual Run for Funds fundraiser into a color show.

Rainy weather last Friday forced the outdoor “2015 Run for Funds in Color” fundraiser to be moved inside to the gym but did not dampen the children’s enthusiasm.

The dual purpose of the run is to encourage exercise and to raise funds for school events. By collecting pledges from students in varying amounts, the Fund Run raised about $4,900 of a $7,000 goal, said Principal Gina Ryan.

Supplied with bottles of food-dye-colored water and cornstarch, the children took turns splashing color on themselves and each other.

By grade level, they started with a workout in the gym, followed by doing laps around the hallway – one of the rare occasions they had permission to run in the hall. That was followed by a special treat for children who paid extra money. They earned a shot at spray painting the principal. 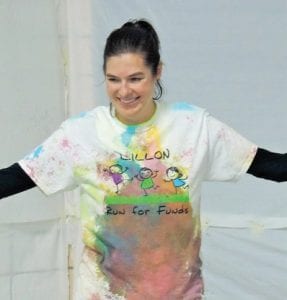 Dunk-tank style, Dillon Principal Gina Ryan donated herself as a human spray paint canvas for students who paid extra for the privilege.

In the final color phase, the kids were given handfuls of colored cornstarch to throw all over each other, roll on the floor and generally indulge in a colorful messy melee.

All students who donated at least $25 received a special screened T-shirt. The classroom that donated the most money won a Smoothie party. Students who donated $100 or more were invited to a special “color” lunch catered from Italia Gardens, with fun games and activities.

The Fund Run is Dillon’s largest fundraiser of the year. All money raised by the Parent Club is returned to the students in various ways such as classroom field trip assistance, free books, birthday books and pencils, assemblies, the Halloween Hike, and a Field Day.