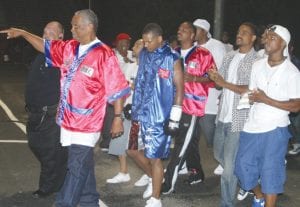 FLINT — Atwood Stadium was alive with excitement last Saturday in anticipation of Anthony “the Dog” Dirrell’s Universal Boxing Organization championship matchup at 168 lbs. against former Olympic silver medalist Dante “The Inferno” Craig, a challenge the Flint native met with a fourth-round knockout to become the UBO Intercontinental Supermiddleweight champion. While the outcome was exactly what the crowd was looking for in the first event promoted by Leon Lawson Jr. and Team Dirrell, this level of adversity has been a recurring theme in Anthony’s life that’s hit every range of the spectrum from downright tragic to borderline absurd, finally peaking by way of his newly acquired title belt.

“I just wanted to give the crowd a show. I had a game plan, which was to keep him on the outside, but I really didn’t do that,” said Dirrell, who upped his career record to 22-0 with 19 knockouts with the win. “It feels good to have some gold around my waist, but there’s plenty more to come.” 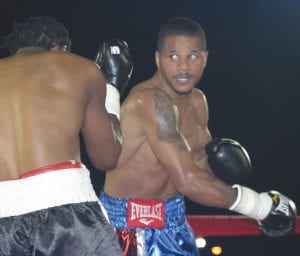 While the first round of the fight was momentarily delayed so that security could clear out the ringside area and featured a rather aggressive feeling out process by both fighters, Dirrell found himself with his back against the ropes during the first half of the second round, which he responded to by unloading a volume of hooks and jabs on his opponent. Just when the session was coming to a close and Dirrell truly started asserting his dominance, an accidental low blow sent Craig to the canvas, and while the Cincinnati native was able to continue, his verbal protests to the contrary spelled the beginning of the end for him.

In the third round it was more of the same as Dirrell stepped up the intensity and began putting some power behind his shots instead of just trying to win the numbers game. With damage mounting and the momentum firmly working in Dirrell’s favor, Craig was forced to step back from his aggressive game plan and put a little more focus on his defense, thereby giving “The Dog” the ability to pick his shots. Dirrell blasted away with blows from the hip that bounced off of Craig’s rib cage, wobbled his legs and stole from his ability to breathe properly.

With the fight firmly in his grasp, Dirrell was even able to put both hands behind his back on several different occasions, one more sign the night would be ending early for Craig, who was a last minute replacement after Michi Munoz of Mexico was arrested by federal law enforcement officers over a week earlier. When the duo clinched at the end of the third round and Dirrell gave the crowd yet another ear-to-ear smile, it was only a matter of time before all the accumulated damage brought things to a halt.

“It was a good turn out. I didn’t expect there to be this many people, so it was exciting. It feels good to know that I did something for the city. I just wanted to give the crowd a show and make sure they got their money’s worth,” said Dirrell. “This isn’t the end. There’s more to come.”

Dirrell’s existence has been anything but worryfree, including a 2007 Non-Hodgkin Lymphoma diagnosis that required 10 months of chemotherapy. The younger brother of pro boxer Andre “The Matrix” Dirrell was arrested for suspicion of armed robbery on Jan. 28, 2008, only to be released for lack of evidence the very next day. With 190 amateur bouts to his credit, Dirrell’s most recent fight before this matchup was a technical knockout of Alberto Mercedes on May 13, 2011.