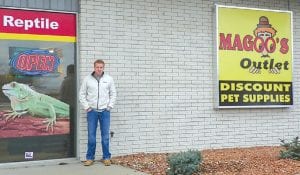 Matt McCord, co-owner of Magoo’s Outlet, at their newest store.

FLINT TWP. —About a year ago, Matt McCord was shopping for a Christmas gift for his mother, when he spotted a building for sale at 3314 Linden Road.

Now people shopping for Christmas gifts in that area can shop at the pet supply store McCord and his dad have opened there.

Vacant since about 2007 after Hancock Fabrics closed, the 11,000 square-foot free-standing building is conveniently located across the street from Genesee Valley Center shopping mall in the county’s busiest retail corridor .

To McCord, who with his father Gib McCord owns Magoos Outlet Discount Pet Supplies, it was the perfect spot for their third store.

They had been wanting to open a store to serve customers on the west side of the county and eliminate the need for them to drive all the way over to Magoos’ east side store on Center Road in Burton or its north side store on Pierson Road.

The one-acre Linden Road lot was Hancock’s last unsold property in Michigan, so the McCords purchase offer was accepted.

“We’re permanent,’’ McCord said of their investment in ownership rather than leasing.

The store opened in mid-October after renovations which included relocating the front door, upgrading the heating and cooling systems, resurfacing the parking lot and building a small section at the back so that delivery trucks could unload out of the weather.

But discounted pet supplies are Magoos’ bread and butter and a major focus is the sale of Gib’s brand, named after his father, and made in Michigan.

The business started out in the 1980s as Cash and Carry Feeds selling only pet food at about 13 stores statewide. But the McCords changed their retailing concept in 2000 when they added dog beds, cat toys, and furniture and a lot more. They opened the Pierson Road store in 2006.

With its wholesale background, Magoos still buys products by the truckload, McCord said. “Even Walmart can’t compete with us on birdseed (prices),” he said.

Wild birdseed, as it happens, is one of their top sellers behind dog and cat food.

Bird watching is the number one hobby in North America and people who want to attract feathered friends to their backyard feeders will spend $70 to $80 a month on bird seed, McCord said, noting that he can sell through a truckload of wild birdseed in 30 days.

So far business on highly-trafficked Linden Road has been good but different, McCord said. The Center Road store is busy all day while afternoons and weekends are the busiest at the Linden Road store, he said.

The next goal for Magoos is to open a south side store perhaps in Fenton or Grand Blanc, he said.