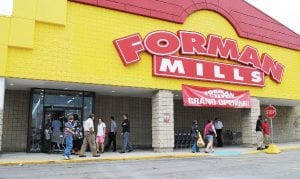 A crowd of nearly 50 people were waiting when the store opened its doors at 9 a.m., and managers Di Vennon and Amy Collier estimated that 500-550 people had come into the store by 2 p.m. opening day. Forman Mills Clothing Factory Warehouse, which is headquartered in New Jersey, features a wide variety of apparel for the entire family, including urban fashion and designer labels such as Rocawear and Sean John. The store also sells school uniforms, shoes and home fashions like rugs, towels and comforters.

The store also offers promotional items, including eight men’s T-shirts for $10 and buy four towels and get one free. “The store is mostly based in deals,” Vennon said. Vennon, who manages a store in New Jersey, said she was brought to Flint Township to help open and train the new store. Once she heads back to New Jersey, Collier will be the main manager. The Flint Township store had been in the planning stages for five to six months.

“We plan to have more stores come in the surrounding area, and also one coming in soon to Chicago,” Vennon said.