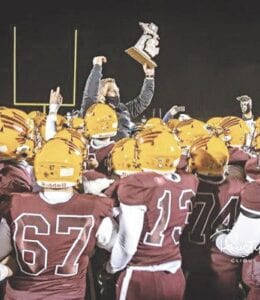 The Davison Cardinals scored a major victory on the road to becoming the State Champions for a second year in row when they clinched the Division 1 district championship defeating Grand Blanc, Nov. 13, by a score of 48-19. The game was played in 30-degree temperatures at Cardinal Stadium. The Cards will have to put a hold of things for now after the state COVID-19 restrictions shutdown high school athletics for at least the next three weeks. The team is shown here with Coach Jake Weingartz holding the district championship trophy.