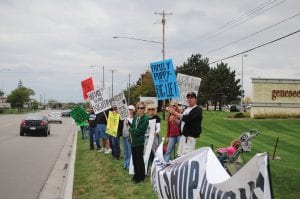 RALLY — Forty-four advocates joined the Puppy Mill Awareness group for a peaceful rally Sept. 18 against The Family Puppy in the Genesee Valley Center. The group protested against the pet store for selling puppies, and not promoting adoptions. See the story on page 3.

FLINT TWP
— Carman- Ainsworth Community Schools learned the district has experienced a steady decline in enrollment over five years after Russ Parks, assistant superintendent of operations, gave a presentation to the board of education at its Sept. 21 meeting.

Parks gave an overview of the district’s population and subgroups, reporting that the district currently has 4,573 students. Five years ago, Carman-Ainsworth had approximately 5,300 students. Parks said the district had budgeted for a decrease of 150 students from 2009-2010, and that after the Student Count Day on Sept. 29, he expects to see a decline of 140-150 students from last year’s count.

“As the economy went bad, our district was hit a little harder,” he told the board and audience members.

Trustee Peggy Anderson asked Parks if the district was settling in terms of its declining enrollment.

“Yes, we are settling, but I think we’re leveling off,” Parks said. “We cannot stop the decline, but we will level off.”

While the district’s overall enrollment is going down, Parks said the amount of students in subgroups are increasing. Last year, Carman-Ainsworth had 62 percent of its students on free and reduced lunches, and Parks expects the number to be higher this fall.

The African-American subgroup has seen an increase over the five-year trend, as well as the students with disabilities subgroup. In terms of pupil counts, Parks reported that numbers are down at nearly all of the district’s buildings. Only Rankin Elementary and Woodland Elementary have the least amount of decline, and appears “stable,” Parks said.

The next meeting of the Carman- Ainsworth Board of Education is 6:30 p.m. Oct. 5 in the administration building.