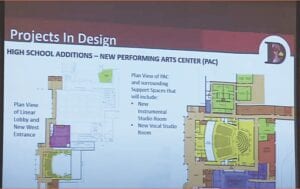 DAVISON — So far, work on the projects stemming from the 2020 Bond passed by voters in March is moving along on schedule and under budget.

Phil Thom, director of operations for Davison Community Schools, reported to the board Sept. 14 that the district has been able to complete an “impressive” amount of work in the six months since voters approved the $71.39 million bond proposal.

Thom praised Kingscott Associates, the district’s architectural and engineering firm, and the project manager DCC Construction, Inc, for doing what he called “a great job.”

“The amount of work we’ve been able to accomplish in six months in a COVID situation is, I think, pretty impressive,” he said. “It’s worked out well for us, the designs are coming pretty quickly. I think you’ll be impressed with what we’re working on.”

The asbestos abatement at the high school was done on the west side of the building where the district plans to begin construction next year on a new performing arts center. Thom said crews clear the area of asbestos and then the areas were restored. That work included:

• Upgrades to the locker room showers

For the roofing projects, work crews began with the high school gym roof which was retaining water in some places.

Once the gym roof was completed, Thom said crews moved across to the alternative education building. He said this roof was about six years past its life expectancy.

“So, we definitely got our money’s worth out of that roof, but it was past time to really move on and change it out,” he said.

It was a similar story at Siple Elementary, where he said the roof was seven years past due for replacement.

On that roof, Thom said water was ponding and the roof was holding water. Many places throughout that roof held water and wouldn’t shed.

He said crews ripped off all the rubber, then added an all new structure underneath to provide proper drainage, then new insulation before putting the roof back on.

Next was the Summer 2020 Mechanical Equipment replacements project. This included work in the boiler rooms at DHS, DMS and Hahn Intermediate School.

At the high school they replaced a circulation pump and a water tank. These will tie in with next year’s planned replacement of the 50-year-old boiler at DHS.

At the middle school, they replaced a water tank and replaced a domestic water boiler.

With the situation at the middle school, Thom said about 3-4 weeks into the COVID-19 shutdown a water tank burst and wouldn’t hold hot water anymore.

If school would have been in session, Thom said the district would have had to close the middle school for up to five weeks while a new tank was ordered and replaced.

“I don’t know what would have done if we were not in the COVID situation,” said Thom. We would have shut down school. But we were able to repair it.”

Thom said the district made a “pretty dramatic improvement” to safety and security at three of its facilities over the summer. Previously, Gates and Siple elementary schools each had one security camera. But over the summer, through the bond, 24 cameras were installed at Gates, covering all entrances and exits, while another 20 cameras were placed at Siple.

Cameras were also installed at Collins field and work in ongoing right now to add cameras to Cardinal Stadium.

Thom then covered the projects currently under construction. This included the new Cardinal Stadium restroom project.

“So, this is a huge upgrade with 13 new bathrooms, a set of sinks, five new stalls and nine urinals for the men’s room,” said Thom. “Construction mirrors the outside (of the existing bathrooms), we matched the bricks and even got them from the same company.”

Construction began at the stadium on Sept. 9 and will be completed Jan. 15.

Thom said the stadium track and turf replacement project is currently out for bid. Plans include adding drainage and track replacement.

He said the north end of the football stadium is very wet and it holds a lot of water. There were a number of repairs to that end of the track since it was built.

“It was a poor design. We’ll add drainage all the way around that will capture that water before it gets to the track and move it,” said Thom. “Then, to the north, we’ll take out about 40 inches of soil from this track. They will move it to fill low areas. We’ll reconstruct the long jump, the high jump, the discus and the shotput. Them put 38 inches of stone underneath.”

He said the district will open bids for this project today (Sept. 24).

The projects currently in the design stage are the Colonial Property off Lapeer Road where the new bus lot will be built. Thom said they are finalizing designs this month. Work begins in November with project completion by May 2021

Thomson Elementary will receive two classroom additions on the north end of the building identical to existing rooms there. They will finalize designs in December, bid the project in January, begin construction in April and project completion is in August.

The Gates Auxiliary Gym will see finalization of designs in December, with the district bidding the project in January and beginning construction in April with completion expected in August.

The Performing Arts Center, Thom said, is in its early stages, but is expected to be the centerpiece of all the work coming out of the 2020 Bond.

“This is going to be something that is really special, this is something to be very proud of,” said Thom. “I expect when this is completed this auditorium will be (the top) one or two in the state and one of the top 5 in the nation … and one of the exciting parts for me is we’re still under budget.”

The Performing Arts Center, with its new linear lobby and west entrance, a new DTV studio and the connector to the Alternative Education Building project will see finalization of designs in March, with the project going out for bid in April and construction beginning in June with completion of project in September 2022.