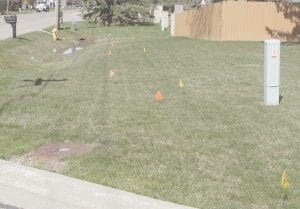 A look at the flags along Lippincott Boulevard where a ditching project is expected to begin this week. Photo by Gary Gould

DAVISON TWP. — A ditching project is expected to begin this week on Lippincott Boulevard, west of M-15 to the bridge.

Davison Township Supervisor Tim Elkins said the area along Lippincott to be ditched has been marked with flags and that Miss Dig had been called to confirm none of its utility or gas lines would be affected.

The ditching of the roadway will lead to the next phase of the project, which will involve paving, followed by another phase that will include the installation of a turn lane on the west side of the bridge. — G.G.