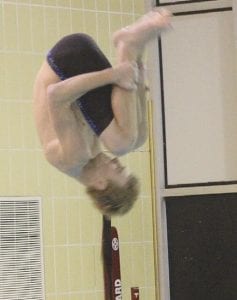 Michael totaled 289 points to grab the final qualifying spot in the field of 26 divers at L’Anse Creuse North High School. Only the top 12 placers from each of three regionals advanced to the state finals Friday and Saturday at Holland Aquatic Center.

Michael is the first Carman- Ainsworth/Flushing diver since Jake Waldron in 2008 to go to state.

Michael had totaled 305 points in the Saginaw Valley League meet two weeks ago, but hit a couple snags at the regional. He started out well and stood fifth after four dives, but a bad dive stopped his momentum.

“He messed up a dive and it got to him mentally,” said Carman- Ainsworth/Flushing diving coach Loren Jackson. “But he came back to hit his last few dives. That was pretty impressive for a sophomore.”

Michael stood 13th after eight dives, but passed another diver in his last two attempts to grab the final qualifying spot.