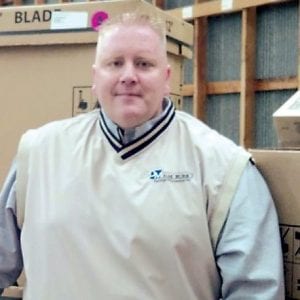 President and Chief Executive Officer David Burr came up with the program “Bringing the Heat Back to the Street” which is designed to give back $100 for every system sold to local police departments.

FLINT TWP. — Feeding off of its name, DM Burr Heating and Cooling is looking to cool off crime rates in Genesee County by helping bring some heat back to the streets.

Serving the State of Michigan since 1998, DM Burr President and Chief Executive Officer David Burr said he and his company hold Genesee County near and dear to their hearts.

“Our company, as a whole, tries to do as much as we can to give back to the community,” said Burr, a Grand Blanc Township resident. “We sponsor the fireworks for the Grand Blanc Fun Fest every year and we also do security for the Fun Fest. We do a lot of things to try and make it (the community) better.”

Recently, Burr and his company have taken its mission of making its community a better and safer place one step further.

Burr said he was inspired to help out local police departments after hearing about the number of crimes being reported on the news combined with the tough economic times taking its toll on communities and police departments, forcing them to make budget cuts that make fighting crime increasingly difficult.

“I noticed the overall crime in Genesee County,” Burr said. “Anytime you watch the news that is all they report on.”

Today, Burr is giving media outlets a new story to report on after he began a program known as “Bringing the Heat Back to the Street” two weeks ago.

The program, Burr said, is simple. For every heating or cooling system purchased by a residential or commercial customer, a $100 check will be donated to the customer’s local police department. The check itself will come from DM Burr, but Burr said the customers name will appear in the memo slot of the check so police departments know which residents helped make the donation possible.

“If you buy a heating or cooling system, no matter where you live in Genesee County, we will donate a $100 check to your police department,” Burr said. “If someone from the City of Grand Blanc buys a heating or cooling system, we’ll write their name in the memo slot and take the check directly to Chief Steve Solomon. If they are from the township it will go to the township’s Chief (David Stamm).”

The response to the program thus far has been wonderful, Burr said, adding that both the customers and police departments have been very appreciative.

“We started this without talking to anybody,” Burr said. “Honestly, they (the customers) are ecstatic. When we’ve gone to the police departments, they have been the same and are really taken back by the donations. We haven’t had anybody that has not been warm about it. Everyone knows the current economy and the lack of police on the roads.”

Burr said they have been able to deliver checks to Burton, Flint Township and Fenton police departments.

The checks are not earmarked for anything in particular, rather they are simply deposited in the general funds of the departments to be used as each department sees fit.

Burr however said he has already received a phone call from Burton’s Police Chief Tom Osterholzer stating the money was being put to good use.

The Burton Police Department unveiled its newly renovated roll call room on June 19. The makeover afforded the department new tables and chairs as well as new flooring, cabinets, dry erase boards, a 60-inch television and a fresh coat of paint. One thing missing from the room was a DVD/Blu-Ray player in which the department could play its training DVDs for its officers.

Thanks to DM Burr though, the room is no longer missing anything.

“The first $100 we gave them (Burton), the chief of police took it to buy a DVD player so he could use the training DVDs for his officers,” Burr said. “They can use this money for whatever they want. They can utilize it to buy new SWAT equipment, training supplies or whatever.”

In the future, Burr said he looks forward to hearing about how other departments are using the donations to purchase necessities to help them better serve the community, adding that the “Bringing the Heat Back to the Street” program is “not a limited-time offer.”

“It directly cuts into our revenue, but at the same time I think it’s a great community program and I just felt like I needed to do something,” Burr said. “As long as the community needs it (the program), we are going to do it.”

(Tara Moreno contributed to this report.)