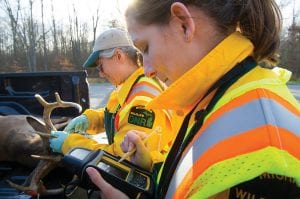 LAPEER COUNTY – Deer hunters don’t have to go far to have their deer checked in Lapeer County with the Lapeer State Game Area hosting a deer check station during firearm deer hunting season.

Most Michigan deer hunters have been in the woods as much as possible during this firearm deer hunting season.

However, one group of deer hunters — members of the Michigan Department of Natural Resources’ Wildlife Division — have given up some of their days afield to check other hunters’ deer at check stations around the state.

Collecting valuable data about the state’s deer population is something the DNR has been doing for decades.

The DNR is aided in its efforts by students and other volunteers and through partnerships with meat processors, taverns, recreation vehicle dealers and other businesses that provide some of the most popular check station venues.

“We get a ton of information from our hunters,” said Chad Stewart, the DNR’s deer specialist, who is located at the Rose Lake Research Center. “It’s the one time of year when we can really get our hands on so many deer.”

The DNR collects data on the age and sex structure of the harvest, location data from where the deer are being taken and a glimpse of the herd’s overall health.

“We get a lot of data at the township range-section level,” Stewart said. “Any one data point doesn’t have much value. But, when you get that same data over time, it has a far greater impact. We’re able to tell where these deer came from and anything that changes over time regarding any of the factors we’re looking at.”

Across Michigan, from Wakefield in the western Upper Peninsula, to the Mackinac Bridge and south to the Point Mouillee State Game Area in Rockwood, the DNR runs check stations at a number of highway rest areas as well as at almost all DNR field offices, at many deer processors, even some restaurants.

“Our field staffers have good ideas of what makes a good deer check station,” Stewart said. “A lot of it’s historical — we go back to the same places year after year after year.”

Vicki Brown, an analyst in the DNR Wildlife Division in Lansing — and a deer hunter — spent part of this week working at a rest area check station along Interstate 75 at Clio. She said she really likes working there.

“You get a diversity of people coming through here, not just from one or two counties,” Brown said. “You get to see a lot of hunters and you get to hear their stories.”