Citizens asked to share any information on illegally killed bucks 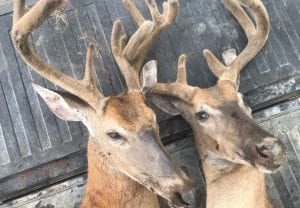 Michigan conservation officers are asking for the public’s assistance as they investigate the poaching of two adult male deer, shown here, in Tuscola County’s Akron Township. Call or text the Report All Poaching hotline at 800- 292-7800.

TUSCOLA COUNTY — Michigan Department of Natural Resources conservation officers are investigating the illegal killing of two male deer in Tuscola County, and ask anyone with information to report it.

Conservation officers on Aug. 1 found the remains of two bucks – an 8-point and a 9-point – in a ditch near the intersection of M-25 and Clark Road in Akron Township. The antlers of both bucks were still in full velvet, which is a vascular skin that bucks will begin shedding in the fall.

“Not only is this a crime, but it’s a tremendous waste of two beautiful animals,” said Lt. Jeremy Payne, District 6 supervisor for the DNR Law Enforcement Division. “Any tips from the public will help significantly as we investigate this case. For example, if anyone saw flashlights being shined or deer in the back of a truck, we would like to know. Poaching is criminal and unethical, and the DNR wants to work with citizens to protect Michigan’s natural resources.”

Poaching an antlered white-tailed deer is a misdemeanor punishable by fines of $1,000, reimbursement of $1,000 per animal and $500 for each antler point on deer with antlers having between 8 and 10 points.

An individual offering information that leads to a successful conviction may be eligible for a reward through the Report All Poaching (RAP) program.

Anyone with information is encouraged to call or text the RAP line at 800-292-7800. While citizens can remain anonymous, they must provide their names if they wish to be eligible for a reward. The RAP line is a convenient, effective way for citizens to report the illegal taking of fish or game, or damage to the state’s natural resources. The line is open 24 hours a day, seven days a week.

Michigan’s hunting season calendar provides the dates during which deer hunting is permitted.

Michigan conservation officers are elite, highly trained professionals who serve in every corner of the state. They are fully commissioned peace officers with authority to enforce the state’s criminal laws. The current class of recruits is undergoing the third week of rigorous training in the DNR’s 23-week Conservation Officer Academy. Learn more at www.michigan. gov/conservationofficers.